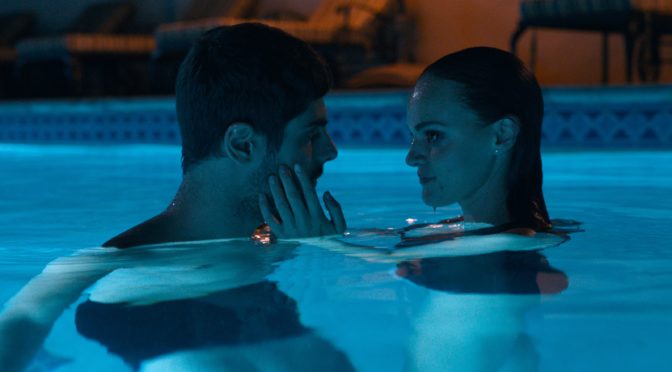 Debut film of two Italian directors, Spinotti and De Amicis, Now is Everything was made thanks to an Italian-American indie production, starring the talented Anthony Hopkins, Madeline Brewer and Camille Rowe. It is a rather complex film with various experimental elements in it, paving the way for two possible interpretations.

The first one revolves around the concept of metacinema. The whole film wants to dismantle the basis of “canonical” cinema language and to focus its attention on how this language expressive potential is not fully exploited at the same time. It is no surprise that in this movie there are a lot of references and quotes from innovative film movements from the past; futurism, New American Cinema, Nouvelle Vague and even Maya Deren, all of them have broken with tradition and society of their own times. At the beginning, this concept sounds interesting but, as the movie goes on, it turns out to be its weakest point. As a result, the film looks like a melting pot of different visual stimulations that tires the audience out giving them too many elements to process.

Another interpretation of Now is Everything is to be found on its subject. The film does not have a plot, since it analyses the impact that loss and death have on the mental health of the main character, played by Irakli Kvirikadze at his first appearance on the big screen. The unconscious is the place where one’s true nature is revealed; it communicates with us via images, through memories, dreams and nightmares. Here the line between fact and fiction fades out and past, present and future mingle together. Since the film uses the language of the unconscious, the visual features of the film are of vital importance. The great cinematographer Dante Spinotti (Riccardo’s father) chooses to work on contrast in his photography, highlighting the black and white of the pictures so as to create an atmosphere that recalls the one in noir and thriller films. Since it is an exploration of men’s unconscious, the film gives a huge space on the representation of female body, the true main character’s obsession. All these images are men’s mental projections; for this reason, women are depicted in a very provocative and sensual way, with perfect bodies, beautiful faces and completely naked at times.

Now is Everything is a film that has fun playing with the audience, surprising the viewer with a story made of images with a strong visual and emotional impact. In the end, this is the true essence of film art.