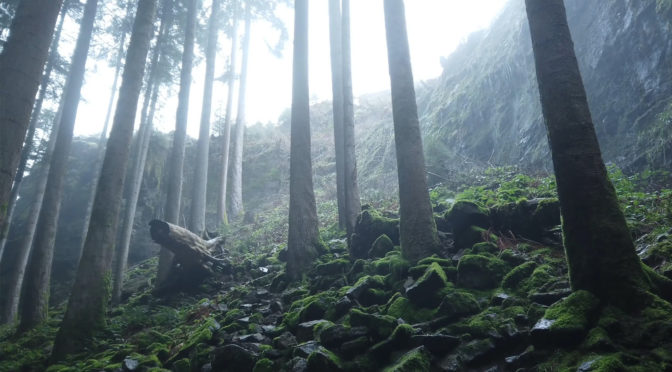 During the winter of 1974, Werner Herzog travelled on foot from Munich to Paris to save his friend and mentor’s life, the film critic Lotte Eisner, who is critically ill. A symbolic act of love that the director told in the book Of Walking on Ice(Sentieri nel ghiaccio). In this documentary, presented out of competition in the section TFF Doc Paesaggio of 38° Torino Film Festival, Pablo Maqueda takes its cue from Herzog’s writing and retraces its steps in a journey halfway between the travelogue and the bildungsroman, which becomes an opportunity to reflect on the meaning of making cinema today.

With a camera fixed at eyes level, the director goes through the places described by Herzog in his book in total solitude, showing them through long subjectives. As you see snowy mountain trails, mist shrouded forests and villages that look like they came out of Murnau’s Nosferatu, Maqueda’s voice-over confides in the viewer thoughts and reflections on his conflicting relationship with cinema, on the joy for the projects he carried out, but also on the frustration for the failures and refusals received during his career.

The topics are linked, from time to time, to the different emotions aroused by the places crossed. Her voice is alternated with that of Werner Herzog himself, who reads excerpts from Of Walking on Ice.

Maqueda did not limit himself to cite the book’s passages, but he grasped its essence. Herzog did not dwell so much on the descriptions of the places he visited, as on the emotions that these aroused in him. The Spanish director did the same thing, he just transposed it to a visual level. The spectator ideally walks with him and is captured by the expressionistic and dreamlike atmosphere of the landscapes. After all, it is the latter who always has the last word.

The general tone is made even more suggestive by the marvelous work done by José Venditti with soundtrack, which are able to capture the different moods suggested by the images.

Maqueda presents the path shown in the documentary as a metaphor of his life. Every experience, even the most negative, has made him what he is now. In this sense, there are analogies with the bildungsroman.

Following in Werner Herzog’s footsteps means following those of the cinema itself. Not surprisingly, one of the last stages of the journey is the Cinemàtheque Française, the world cinema’s sanctuary, founded by Henri Langlois and Georges Franju also with Eisner’s collaboration.

Dear Werner is not only the story of a pupil on the trail of the teacher, it can be interpreted as a metanarrative reflection on the creation of images or as a declaration of unconditional love towards Werner Herzog and Lotte Eisner. It lends itself to multiple levels of reading, all overlapping each other. In any case, the best way to grasps its meaning is in a sentence uttered by Maqueda during one of his monologues: “Making movies is a journey. It doesn’t matter if you are the first or the last, the important thing is to keep walking”.