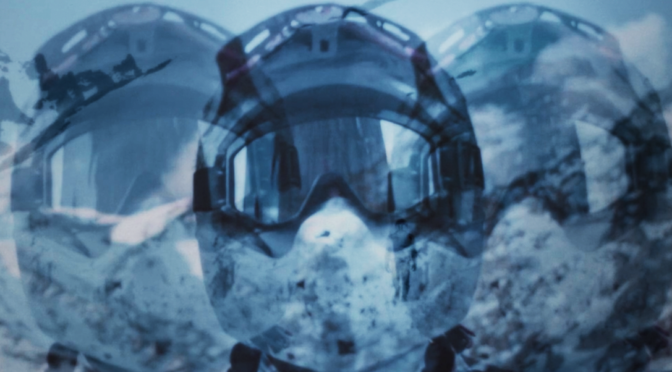 Slow panoramic scour a sidereal landscape, an expanse of mountains covered by snow and dominated by the wind. It is perhaps an alien territory that is at the center of El elemento enigmático, a hostile environment in which three men struggle to advance. Men in helmets and motorcycle suits, without face or voice (we under stand the dialogues only through subtitles), wandering aimlessly waiting for their own end. An atmosphere of suspension persist throughout the movie, a work difficult to categorize, halfway between storytelling and video art. Indeed, if it is possible to trace aspects dear to science fiction,such as the clash between nature and man, these are sucked into the omnipresent aura of mystery, a dense and at the same time impalpabile atmosphere, like the icy vapors emanating here from the rocks.

Therefore, there is no way to solve the enigma: the movie has the same consistency as the snowy landscape, similarly silent, impenetrable, refractory to meaning. There is only one weapon left for man to get closer to nature: this is the function of stylistic experimentation employed by Alejandro Fadel, manipulation of reality in an attempt to understand it.

Where El elemento enigmático records the individual’s powerlessness in the face of the real’s immensity, and experimentalism is an attempt to approach destined to fail, The Philosophy of Horror – A Symphony of Film Theory proposes the redemption of the human gaze, possible since the comparison does not take place with nature, but with culture. The subject of the video-essay is genre cinema and the first two chapters of one of its most famous sagas: that of Nightmare.

However, movies are only the starting point, the inspiration behind an iconic, almost pop-art reinterpretation in which images are repeated, transformed and defunctionalized. The alteration practiced by Péter Lichter e Bori Mátéon the original film resemble an endless series of chemical reactions, as if the directors wanted to dissolve the films to observe elements that compose them. Matter thus undergoes a mutation’s process: the immersive (but above all submersive) flow of still images brings the fragments of the two movies to a boil, to break them down and penetrate the semantic mechanism. An operation similar to 24 Hour Psycho, an installation with which Douglas Gordon slowed down Hitchcock’s masterpiece to the extreme in 1993 (other pillar of this kind) to expand its flow and understand its meaning.

If the video-essay represents a popular formula today in the reworking of images, The Philosophy of Horror takes a further step, including the theory of cinema itself in his reflection. The visual flow is in fact interrupted by some extracts of the homominous essay by Noël Carroll, definitions of audience theory keywords that enrich and guide the operation.

Although the film becomes so a meta-essay, it is still not a cold and aseptic treatise. The spectatorial emotion studied by Carroll filters through the movie, creating that mirror effect mentioned in the signs. Not only (thanks to the particular soundtrack) fear and restlessness, but also transport and hypnosis, and the fascinating approaching to the enigmatic element.