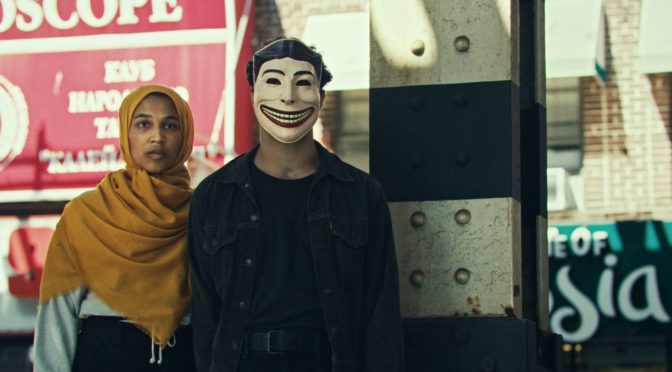 Funny Face opens with the close-up of Saul (Cosmo Jarvis), an introverted boy from Coney Island, looking into the camera wearing a grotesque grinning mask. Like The Joker, even the protagonist of Tim Sutton’s new film is an outcast who craves revenge for wrongs suffered. The mask thus establishes a direct dialogue with pop iconology which, starting with Todd Phillips’ latest film (Joker, 2019), has made that smile a symbol of oppression.

To bring the protagonist back down to earth is Zama (Dela Meskienyar), a Muslim girl fleeing a family who reproaches her for being “too western”. Their relationship recalls the classics of the “lovers on the run” genre, in which love presents itself as the only lifeline in a suffocating reality, that gives no possibility of redemption to the marginalized, against the backdrop of a New York at dusk. But the blossoming of love at sunset seems to want to stage the end of a relationship, rather than the beginning.

Funny Face’s New York is a labyrinthine urban space in which the stories of the protagonist couple are intertwined with those of a wealthy building speculator (Jonny Lee Miller), who evicted Saul’s grandparents from the construction of a useless parking lot. “This city doesn’t care about losers! It only cares about money!” the protagonist yells at the top of his voice, in the midst of a nervous breakdown. The reason for this anger comes from the moment in which the basketball team he supports, the Knicks, lose to the Nets, the same who, for the construction of their stadium caused the dismantling of a Brooklyn neighborhood, forcing hundreds of inhabitants to leave their home.

As in Taxi Driver (Martin Scorsese, 1976), Funny Face seems to move towards a tragic epilogue with conscious resignation. The soundtrack, composed of pieces of electronic music, contributes to create hallucinated and claustrophobic atmospheres, typical of a New York noir.

Similarly, photography is tinged with dark colors. Everything concurs to portend an imminent disaster. Yet, the revenge craved by the protagonist ends up not consumed, because the tragedy, the real one, has already taken place with the gentrification and building speculation that have caused the crisis of entire neighborhoods. And it is no coincidence that in the finale it is the rich antagonist who wears the mask and looks in the car, as if to remind us that he is the cause of that sarcastic smile. If Joker’s intent was to show us what the face of the oppressed is, Funny Face reminds us who the oppressor is.