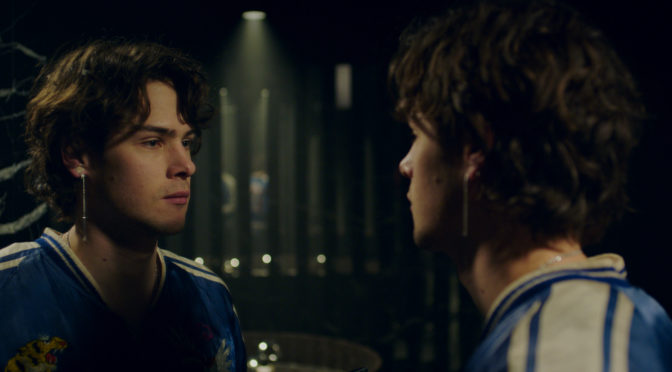 To die is not difficult. Difficult is the life of those who remain, after death has passed in front of them; and Mario learned this in the hard way..

Mario (the very young Thomas Prenn) is young and handsome and he loves to dance. But Mario is not Lenz (Noah Saavedra), the young promise of the country, even more beautiful and talented than him. Mario survived so he will be asked to the bitter end why he is not the one who died in place of Lenz, victim of an attack in Rome.

Mario is the “strange one” of the country, he always has been. In his border village he appears too effeminate and therefore he is “blamed” for having dragged Lenz into the gay club where the shooting took place while it was the latter who was secretly homosexual. Mario works a lot on it but finds it hard to get by: his father can’t raise him, his mother doesn’t see his stepfather’s harassment, his ex-partner doesn’t allow him to meet his daughter. No one seems to notice his fragility and pain: “Why were you in Rome?”, “Did you offer your condolences?”, “What were you doing at the station?” are the recurring questions. He is never asked about how he feels.

Evi Romen’s debut feature is a tale of many things. Of course it is about a community touched by a distant and sudden violent death but also about the personal drama of never feeling really in the right place, of not feeling well in your own skin. It is a “borderline” story, a song about the pain that cannot express itself, about the fear of being different. Different like Mario when he dances like a madman in a black suit or when he puts on a wig to find his true self. Different like the Muslims who for the small minds of the country are only bombers, people not to be seen with, more dangerous than drugs. Yet only in the Islamic community Mario will find a hug, a word, the acceptance and understanding he needed to get out of the world of heroin.

The main role in the story is played by the music: nostalgic, misunderstood and omnipresent Italian songs. Songs that you always try to stifle and can only exist far from the thought of the country. As in a forest at night, dancing with a wig on your head. The moment in which Mario will perhaps be closest to his truest self.