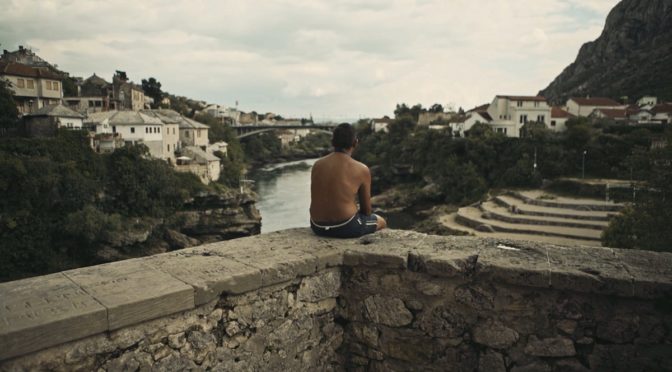 The town of Mostar, its divers and a bridge really do split the generations of a community that is trying to forget and move on from war. Competing in the Italiana.doc’s section, Daniele Babbo makes his directorial debut with I Tuffatori – The Divers, quietly moving in the heart of Bosnia, along with the voices and memories of Igor, Denis, Miro, Edy and Goran. Faces and bodies that bewitch tourists with their leaps into the void, and at the same time hide the fear of an unknown future.

The director’s narration, created on the basis of a meticulous mise-en-scène, moves through visual and metaphorical leitmotifs of diving and the bridge. Babbo makes his intentions clear from the very beginning: the first shots are the only ones to actually be panoramic during the whole movie, since after that, Mostar’s wonder (UNESCO’s World Heritage since 2005) will serve as a container for the men’s stories and lives that they will tell. On the one hand the observing strategy is preferred, which shows how the story unfolds in front of the camera without the need of a narrating voice; on the other hand there is the perceptive element, result of an experience lived by the author himself, who takes the audience by the their hands, guiding them through a five-year long journey perfectly connected frame by frame.

It’s not actually the divers’ voices that tell the story, but rather the details in which the director’s attention lingers: the wounds on the performers’ bodies soon become the equivalent of the city’s scars, battered by the Balkan war tragedy, which little more than twenty years before was destroying the future of an entire generation. The same one that, in 2020, in a country that is just a few steps from Italy, has to look for jobs abroad and live far from the family.

Along the lines of the dutch bridge narrated in the early days by Joris Ivens (De Brug, 1928), almost a hundred years later, Babbo uses a different structure in order to narrate an ongoing shift. This time, there is no construction, but destruction: the old bridge, Yugoslavia’s symbol, is now replaced by a new bridge, a symbol of a policy that is only ready to exploit its people. It is a melancholic point of view, but it is not negative; as the new bridge too, with time, will become old itself and could be the symbol of a rediscovered sense of belonging for the people of Mostar.