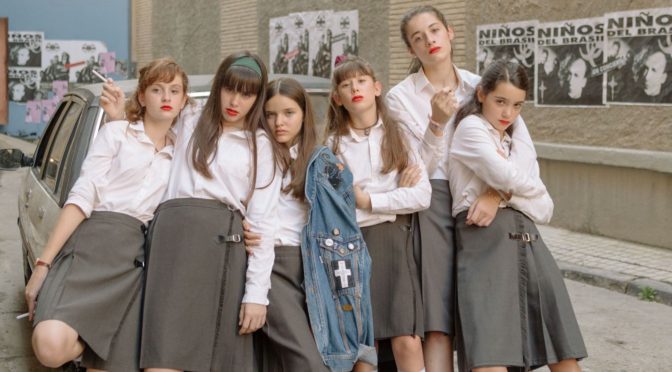 Pilar Palomero’s first feature film has two strong points: realism and ease. This combination characterises both the storyline and the overall style, making Las Niñas an emotional and nostalgic film. The protagonist is Celia, an eleven-year-old girl who lives with her young mother in Zaragoza in the early 90s. Her friendship with Brisa, the new girl in town, who rejects religion as a totalising concept, shows Celia a different understanding of reality.

Indeed, the girl must find her place in a world that turns out to be very contradictory: on the one hand, she is receiving a strict Roman Catholic upbringing from nuns; on the other hand, she is beginning to discover the outside world, which is made up of freedom and transgressions. This dichotomy also reflects the internal conflicts in Spain during that time: the conservative culture which feeds on social prejudices, and the country’s drive towards modernity, fuelled by the Barcelona Olympics and the Seville Expo ‘92. The in-depth study of the historical period, the accuracy and the attention to detail are self-evident: the videotapes, the TV programs such as Mama Chicho, the costumes and, above all, the 4:3 format, combined with the choice of predominantly warm colours. It looks like old films from the Generation Y’s childhood, and in fact, the film evokes strong nostalgic feelings in those directly concerned.

The use of close-ups and the hand-held camera completely immerse the viewer in Celia’s progressive loss of innocence and in every relatable situation: playing at being a grown-up by pretending to smoke, rummaging through parents’ drawers, putting on makeup for the first time, using the white-out as nail polish. The journey to adolescence inevitably touches upon the taboo of sex, a theme addressed in three fundamental moments in the film. First of all, sexuality emerges from the desire to become part of the group of older girls: hanging out with them involves approaching the opposite sex, going to the disco, playing drinking games and secretly smoking cigarettes. Secondly, the theme of sex is fuelled by the girls’ curiosity, which leads them to discover how a condom is made and to compare their physical changes. Thirdly, the theme is linked to the historical context of the film: a time characterized by AIDS prevention, advertised on television and billboards, as well as through the disturbing stories shared among the girls.

The consequence is an all-female journey in search of one’s own identity; a story in the name of nostalgic realism, but also an opportunity to reflect on how much the contradictions of the surrounding world influence our personal growth.