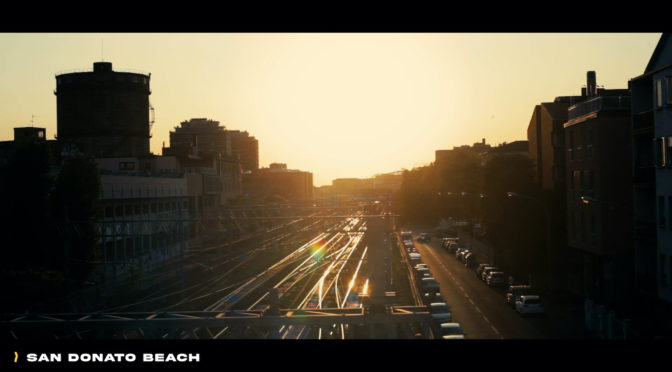 “The world goes on but you feel a little further behind”

Patrizia pronounces this sentence looking towards the camera. The sounds of the nearby street are the background to her words. The sun enlights her face and from her eyes transpires the typical melancholia of those who have suffered much, but also the hope of who doesn’t want to surrender. In this photo we can summarize the meaning of San Donato Beach, the new Fabio Donatini’s feature film, in competition at the 38° Torino Film Festival in the section TFFDOC/ Italiana.

The documentary starts from an ambitious premise: to narrate the loneliness. To do this, it has been used a direct approach. During the summer, the period in which the city is empty and the frenetic pace of metropolitan life slows down, the director and his collaborators have gone around through the San Donato’s district streets, on the Bologna’s outskirt, to interview the people who live alone and get their stories told.

A project that took two years (carried out before the pandemic), from which emerge the portraits of different characters. Besides Patrizia, that is depressed, there are Reza, forced to live on the street, the young Andrea, ludopathic and Zio, serbian – escaped from Ex-Jugoslavia during the civil war – obsessed by sex and women.

They are social outcasts, victims of traumatic events that have marked their lives. For them the time is suspended. They live in an eternal present regretting the past

The neighborhood, with its dilapidated buildings and its empty streets, acts as a sounding board for their inner distress. The film editing is redundant, the frame times are dilated and the camera always returns to the same places, showing the low raises and the abandoned parks. It is as if time had stopped. The sounds of the cars honking, of engines and of the wind, are amplified almost to the limit of distortion. They are not only sound effects, but real voices that seem dialogue with the people interviewed.

The direction is limited to the minimum, with fixed camera and static shots. Donatini becomes spectator, who does not want to invade characters’ space, leaving them to take the stage. They speak freely, without filters, they expose their own fragility, their vices and desires. Each of them is associated with a song that reflects their state of mind – custom soundtracks that include some of the Sanremo’s greatest hits, like Jimmy Fontana’s Il mondo, Ricchi e Poveri’s Che sarà and many others.

The idea behind San Donato Beach is interesting, especially because Donatini was able to describe suffering without falling into pietism or rhetoric. The juxtaposition of the songs with the protagonists means that their portaits are lighter and sometimes tragicomic. Some doubts remain about some choices, such as that of the assembly too ripetitive and the minimun variability of the places shown. From the first minutes a certain predictability is generated but, fortunately, the short duration of the documentary avoids the danger of boredom.