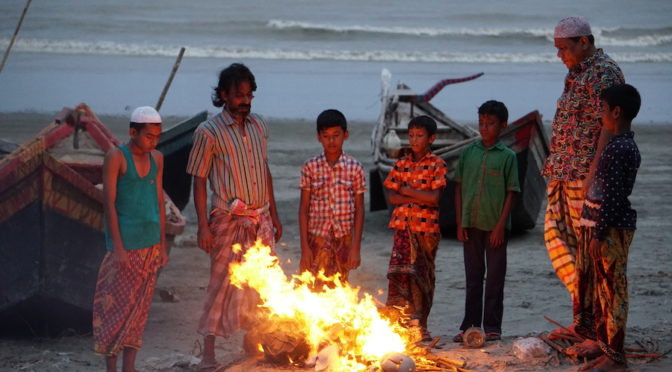 Rudro (Titas Zia), a young artist in search of inspiration, decides to leave the chaotic life of Dhaka and embark on a journey to a remote mangrove island in the Bangal Delta. At first, he is welcomed by the local community, a small group of families who make their living fishing, but Rudro soon finds himself misunderstood and then ostracized by the villagers. Led by the Chairman (Fazlur Rahman Babu), imam and local leader, they first stare suspiciously and then with open disapproval at his installations and habits.

Presented in the Out of Competition section and produced in collaboration with TorinoFilmLab – an international laboratory committed to supporting young emerging talents – Sumit’s debut stages the typical clash between different cultures, which seems to reflect a wider contrast between the environment and its pitfalls, as it is well exemplified by the incipit.

In fact, the film opens with a fixed frame: a sculpture of a woman made of a metal lattice, lying on the beach. Behind it, the rough sea and the sky announce the coming of a storm. The theme and the aesthetic of the film are established through this image of threatening waves.

The sea is immediately presented as a beneficial but destructive force, which can both enrich the population thanks to the abundance of fishing and deprive it bringing devastation and death. The force of Nature is continually evoked through the talks of the villagers – who see the manifestation of Allah now generous, now punitive – but also and, above all, through the framing, the powerful gaps which take us to a contemplative dimension. In fact, there are numerous long shots in which the characters are represented as crushed by the surrounding space, submerged by the various shades of blue-gray of the sky that merge with the sea. Moreover, from a chromatic point of view, a recurrent contrast is that between the cold and monochromatic tones of the environment and the bright and colourful clothing of the population.

This is the setting which welcomes Rudro, whose art and ideas, capable of arousing both the fascination and the contempt of the local community, prove the possession of an energy as disturbing as that of the dreaded coming storm.