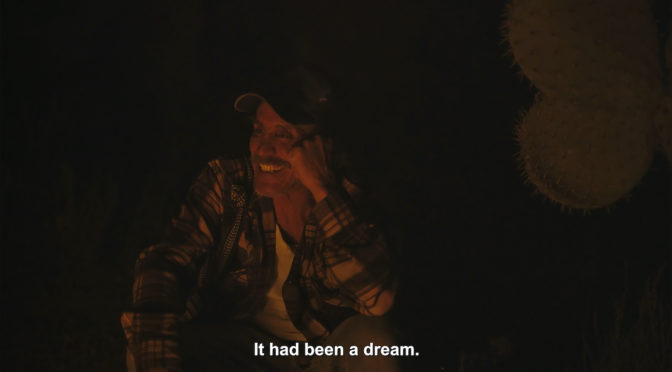 Black screen, wind. Then, human voices together with neighs. In a dusty and austere racecourse, a horse race is interrupted at its acme, through a freeze-frame. Who is the winner, is not for us to know.

At this moment U slavu ljubavi (In Praise of Love) re-starts for the first time. Black screen again, nature sounds again: everything is covered by chirps and bellows. Now, humanity is not even considered on the sound level. From untouched nature to animals. Long static shots, mesmerized by horse bottoms. It seems that Drakulić’s point of view is not special, it is just one of the many possible perspectives. The world flows spontaneously, through every breath. Doesn’t matter if anthropomorphic subjects leave the screen. It is not about décadrages, or the subversion of some rules. It is rather about not identifying ourselves with a hierarchical organization of the audiovisual material. Everything is on the same level, and Drakulić succeeds in giving back the undecidability of one single point of view..

Drakulić describes the liminal space, the passage and interpenetration between tame and wilderness. Surrounded by Sierra Madre mountains, the small Mexican town she is focused on belongs to this dimension. Absorbed in animal calls and noises, it appears like a relicted example of civilization, grafted on a whim onto an unsuitable ground.

Through his predominant voice, Beto tells ambiguous stories. Between reality and mythology, between experience and tales, until infant delirium. Witches born from fire, hidden gold mines, snakes as childhood friends. It is an unsteady empire, with blurred borders. It trespasses into imagination, without caring about its truthfulness.

Young villagers’ nursery rhyme and Beto’s tales are little more than a noise between noises. From people songs to cricket sounds, to the magical owl call.

A failed and unsolved colonization is the subject of Beto and Drakulić story. Here the Earth has kept intact her mystery nature and her secret richness. Her strength is not violent and prevaricative, but rather pervasive and embracing. The town atmosphere is the same as in the archaic Greece.