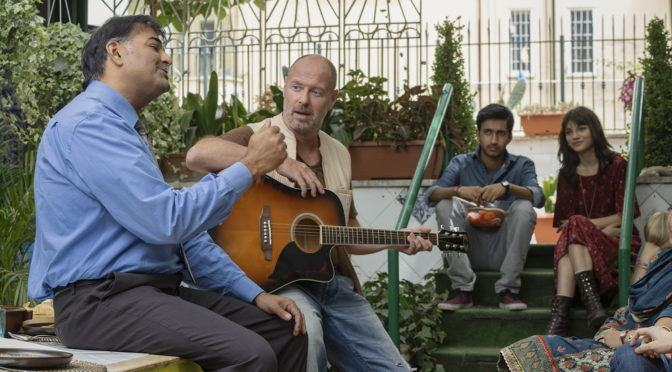 It was 2019 when the Italian audience got to know the world that the debuting director Phaim Buyan brought to the big screen in Bangla, his first work: a gentrified, suburban, Roman world (the events of the film took place in “Torpigna”, short for Tor Pignattara), perfect for the zoomers generation; an ironic world, sometimes even cynical when it comes to the condition of second generation immigrants and their difficult process of integration; a world and an atmosphere perfectly recognizable by those born in the second half of the nineties onwards.

And now, two years after that debut, Buyan returns behind the camera (along with Emanuele Scaringi, former director of La profezia dell’armadillo) to start exactly -now in the form of a television series- from where the film was interrupted: when Phaim (the alter ego of the director, played by himself) was laying on a bed hugging Asia (Carlotta Antonelli), his girlfriend. The two are about to make love (for Phaim this would represent the loss of virginity, but also an act of disobedience to his faith as a practicing Muslim), when suddenly his cell phone rings: his mother warns him that the family’s departure for London (cliffhanger on which the film closed) has been cancelled. The problem now is that the Buyan family no longer has a home, and together they will have to move to a cousin of Phaim’s mother, who lives in Rome. Now the situation for Phaim becomes complicated: making love before leaving to never see Asia again would not have been a problem, even according to his spiritual guide of the mosque; but now that the departure is off, how will his relationship with Asia evolve?

To the writer’s utmost joy, the ironic tone that distinguishes the movie has remained intact in the transition to the serial form (at least for the first two episodes). Even characters and their background have not changed, apart from the presence of the cold but provocative second cousin of Phaim, of the same age, who risks to seriously jeopardize his relationship with Asia. The balance between social satire and sentimental comedy is renewed, also thanks to the great performance of all the main cast – with an honourable mention to the “veteran” Pietro Sermonti, the perfect “fifty-year-old father” of “Morettian” memory. Moreover, the two directors focused on an episode each, offering a conventional staging, though not without effective visual solutions.

It is not possible to know what to expect from the next episodes, except for one thing: Bangla- La serie opens new possibilities for Italian mainstream seriality. Avoiding the affected and didactic tones of so much primetime fiction, Buyan and Scaringi have a real chance of “shaking up” the system, as well as attracting new audiences, also talking about issues (a contrast between modernity and tradition, youth disturbances) in which is often difficult not to lapse into rhetoric. What is ordinary for cinema can become extraordinary, in the transition to the serial system. Only time will tell.