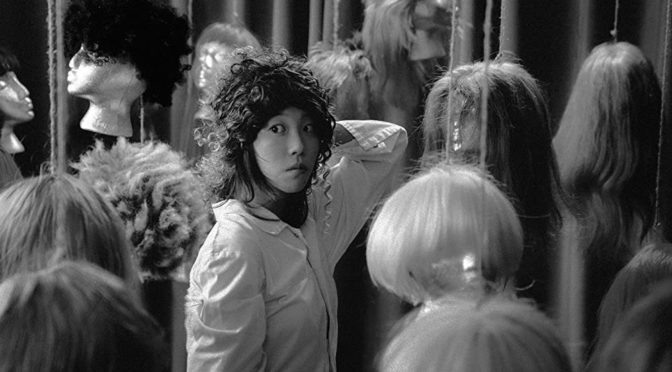 Bipolar inaugurates the new section of the Torino Film Festival called “Incubator”, a new space dedicated to idiosyncratic gazes, to what cannot be pigeonholed. A feverish creative buzz that Queena Li perfectly conveys in her movie.

In the translucent swirls of a silvery black and white, sporadically corrupted by rainbow veins, we see Kun (Leah Dou), the protagonist of Bipolar. Following her geographical and existential wanderings, the spectators find themselves in a sort of vaporous and delirious road movie, in which – as in Monte Hellman’s Two-Lane Blacktop (1971) – the starting and ending points are cryptic to the point of being equivalent and they render the entire film ineffable. Kun flees from a trauma that will be revealed only late in the story and she will have to try to reach the holy waters. Here, she needs to return a lobster with thaumaturgical abilities that she came across during her wanderings. We follow and go along with her on a vague journey that proceeds by inertia and that she herself seems to recognize as rambling: Kun takes one step forward and, at the same time, takes two more in different directions.

Just like her, the film seems to be suffering from a continuous need for metamorphosis alternating shots characterized by exasperated saturation, full of bursting, in which the oppression of Hard to be a God by Aleksej German resounds (2013), to others that dialogue with large fields of emptiness. Changes in ratio, flashbacks that suddenly tear the coherence of the vision, moments of pure performance in which the film takes on the connotations of the musical.

Queena Li’s first feature film is a fluid, protein-like film. Not only for the use of aquatic images, or because the co-star/MacGuffin is a lobster, but because, while following a more or less linear path, it always seems to be about to explode in a thousand streams, threatening the slender idea of structure that underlies it. For this reason, a simple binary word like “bipolar” cannot be enough to describe its chaoticity, it cannot accurately account for it. The film is an introspective journey, of which every (imprecise) geographical co-ordinate is nothing more than a tinsel. It is rather the water – element that recurs obsessively – that functions as a counterpart of the whirling restlessness that crowds the mind of Kun. Moreover, it is Queena Li herself, through the intercession of a caption in the opening, who invites the spectator to get lost in a hypnagogic, liminal space.