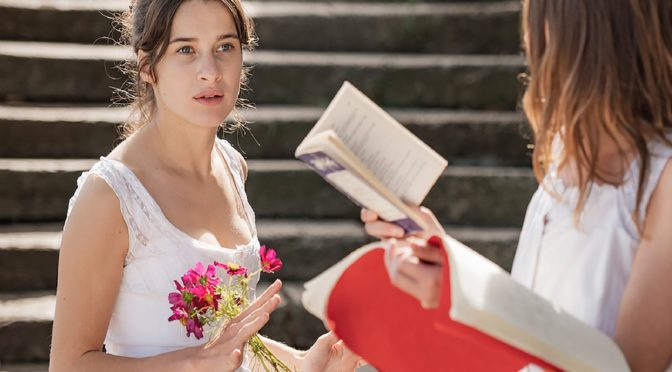 The radiant lightheartedness of youth in 1940s France, scourged by anti-Semitic laws. “Une jeune fille qui va bien” is the debut full-length movie by Sandrine Kiberlain, presented in May during la Semaine de la Critique in Cannes and in competition at the Torino Film Festival 39.

In a cinematic scenario that includes, even in recent times, numerous adaptations of this particular historical period, Kiberlain manages to provide an interesting interpretation, at the same time original and delicate. The movie is set in the middle of the Second World War, and yet what we see is a teenage story, with love stories which end and others that begin, with dreams to be realized and obstacles that stand between the enterprising protagonist and her goal. The film’s international title is “The Radiant Girl”, and this brightness becomes important from a diegetical perspective from the very first sequence. The young Irene (the very talented Rebecca Marder) has an infectious energy and is truly able to light up the scene with her mere presence. Guillaume Schiffman’s photography goes along with this precise narrative choice, because the colors of the closed spaces in which the actors move are cold, contrasted by the bright colors of its protagonist.

One color, in particular, plays a fundamental role on a symbolic level: red. Irene is always wearing something red for at least the first hour of the movie, whether it’s a scarf, a dress or a pair of shoes. Her notebook is red, the chair used to rehearse the scene with her partner Jon is red, as well as the working uniform used in the theater. Red is the color of salvation, of the freedom of this girl who lives aware of the political scenario but is still determined to defend her identity. In fact, as soon as these certainties fail to exist, red disappears from the scene: when the racial laws come into force, the handkerchief around her neck becomes yellow, like the Star of David that will soon end up on her jacket.

However, Kiberlain’s direction fails to remain consistent throughout the movie. The different messages the director wants to communicate are carried out with balance until the ending, which is excessively didactic and extraneous to the rest of the story. It remains an interesting debut behind the camera, in which one can also detect traces of Stéphane Brizé, an author with whom the French actress has collaborated several times. Impetuous and prolonged close-ups, minimal sets (we could be in any historical era) and intelligent use of the off-screen. And despite the presence of an archetypal Anne Frank (who is Kiberlain’s declared inspiration) the film maintains its own identity and does not fall into banal moralism. Irene believes that art and theater make you free. They do, until someone forcefully drops the curtain.