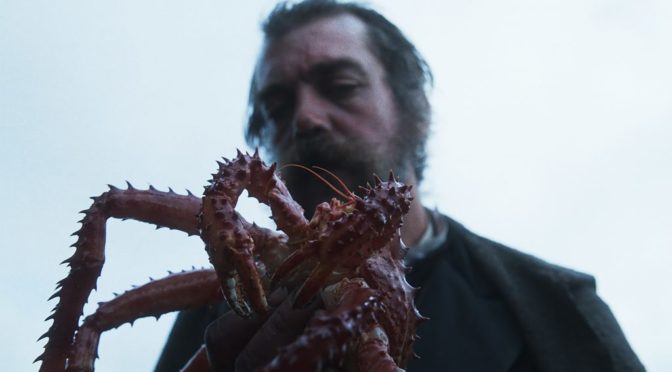 The village elders gather around the fire to tell ancient country stories that have influenced popular culture, and which are now shrouded in the mantle of legend. They evoke and give life to mythical characters, men who have challenged princes and kingdoms in the name of justice, freedom and love and who have distinguished themselves for their virtues or for having committed “deeds”.

This is how the old people of Tuscia remember the legend of Luciano (Gabriele Silli), an atypical hero who lived in those lands at the end of the 19th century. Luciano is a solitary man and a misunderstood soul who, rebelling against his unfortunate fate, madly crosses oceans of time and overcomes every border to rejoin his tragically lost love. Accompanied by greedy and traitorous men, King Crab searches for his treasure hidden in the desolate lands of his unconscious, finding it finally immersed in a pleasant lake that vaguely resembles the shape of a heart.

As already happened with the stories of the Black Beast and Mario de’ Marcella, told in their previous documentaries – Belva nera (2013) and Il Solengo (2015) -, directors Alessio Rigo de Righi and Matteo Zoppis take their cue from the folk tales of the territory of Tuscia, in northern Lazio. However, Luciano’s story is lost in memory as it gets confused among the thousands of versions told. This leads the two directors to Tierra del Fuego, where King Crab is said to have headed after being exiled because of the crime he committed. It is therefore natural to arrive at a cinema of mixed fiction in which, going beyond the categorization of genres, the magical realism of the European fairy tale and the American western blend together, giving life to an invincible character who is immune both to the laws of nature and to the attacks of the enemy.

Alessio Rigo de Righi and Matteo Zoppis seem to feel the urgency to evoke and to remember a past that is disappearing, made of oral tradition and legends and which is engulfed by a present that leaves no respite to technological progress and data storage. In fact, Luciano’s adventures go beyond the industrial landscape, discovering instead enchanted woods and wild lands where the imperative that is whispered among the trees and mountains remains the same: it is not the value you find; it is the image you see.