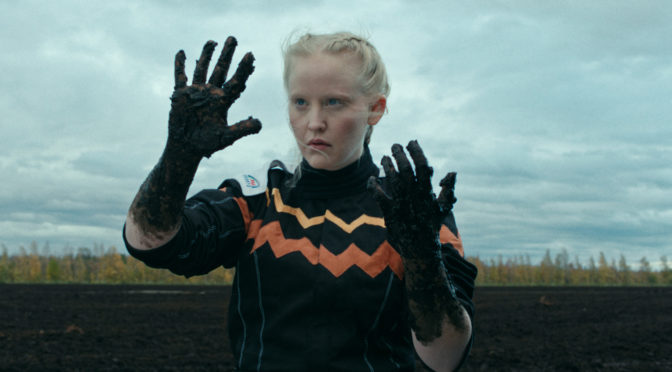 Never-ending opening credits, accompanied by shots of race cars burning rubber and going around in endless circles open the first feature film by Philippe Grégoire, premiered in competition at TFF39. The film, without sacrificing its biting humour, recounts a piece of Alexander Mastrogiuseppe’s life (Robert Naylor), a boy raised in Napierville, a remote and forgotten Canadian village, who leaves his birthplace to go work as a customs officer on the border between the US and Canada. Grégorie describes the same path which he has walked himself, going from living in his hometown to working as a customs officer, to be able to pay for his film studies. Migration towards a different world is just one of many points of contact between the director’s life and the protagonist’s. Indeed, he focuses on the cultural background to which he is bound, thanks to the racetrack built by his grandparents in Napierville.

Alexander, after years of work, is forced to return home when he is accused of hypersexuality: whoever is different, or rather who does not conform to the society established by the world of customs, is not admitted. This intransigence, which will lead to an explicit criticism of the stupidity and violence that often characterise the behaviour of some law enforcement officers, is represented perfectly by the rigid close-ups which show the faces of the new recruits early in the film.

His forced homecoming is not tragic, initially. On the contrary, Alexander finds a renewed appreciation for the things he loved as a child:  from the deafening noise of the engines, which inspired the title of the film, to the smell of petrol, to the screeching tyres. However, as his love for these places resurfaces, also thanks to the impromptu trip with Aðalbjörg (Tanja Björk Ómarsdóttir), an icy Icelandic girl and car racing enthusiast, the burdens of the past reappear as well. Alexander is unjustly accused of making some sexually explicit drawings which trouble the villagers. The police, lacking any evidence, base the accusation on Alexander’s problematic past at the customs. Thus, the boy finds himself in an impossible situation of limbo: he has been banished from the customs owing to his perceived diversity and is no longer welcome in his village because his reputation precedes him. The only last resort is that omnipresent car engine noise, to which Alexander (and Grégorie) constantly holds on to survive in a world that doesn’t belong to him.