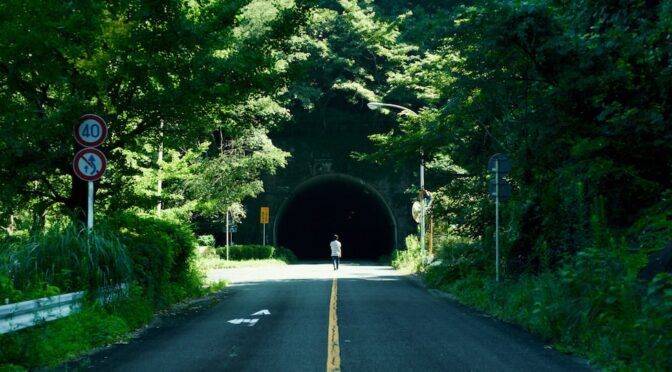 Nagisa, a debut feature film by Japanese director Kogahara Takeshi, can be interpreted as a complex and layered attempt to reframe a bond, to redefine that thin filament that connects the body of those who survive and the increasingly evanescent memory of those who are no longer with us. The world that is portrayed is thus the result of a blurred mental condition, a set of indistinct reenactments created by the mind of a boy detached from reality.

The protagonist is Fuminao, a Tokyo boy tormented by guilt over the death of his younger sister Nagisa, who died three years earlier in a bus accident on her way to visit her brother. One night, the boy accompanies his friend Yuki to visit a tunnel that, according to some popular beliefs, appears to be haunted by ghosts. In this mysterious and gloomy place, he will again face his past, his origins, until he relives in his mind the intense relationship with his missing sister. The film is basically a reprise of a homonymous short film by Kogahara himself in 2017, in which the two main characters, again Fuminao and Nagisa, are two young people in love. The adolescent “love story” of the former is thus contrasted, in this second work, with the memory of a deceased person and the reminder of the faint sigh of death, in a mad dance involving Eros and Thanatos until they become part of the same being.

The protagonist’s apathy, as well as the alienation that affects his existence, arise from the strong trauma triggered by the loss of a loved one. For this reason, the young man’s life is constantly punctuated by mechanical movements and continuous silences, depicted through the use of repeated and interminable fixed shots. The story is fragmented, not at all linear, as if every shred of memory spontaneously resurfaces when Fuminao savors certain physical or emotional sensations. This makes the film a real labyrinth with no way out, a puzzle in which, at times, it is difficult to understand the meaning of certain events.

At the end of this enigmatic existential journey, there are many questions that arise, raising more doubts than answers in the protagonist’s mind. “Do ghosts really exist?” the boy hesitantly asks a policeman he meets by chance outside the tunnel. The man’s answer will come only after a long and ostentatious silence: “The ghost is you.” It is those who have remained anchored in the past, unable to continue a normal life, like a woman wandering the streets in search of her missing son, who represent the real ghosts of society.