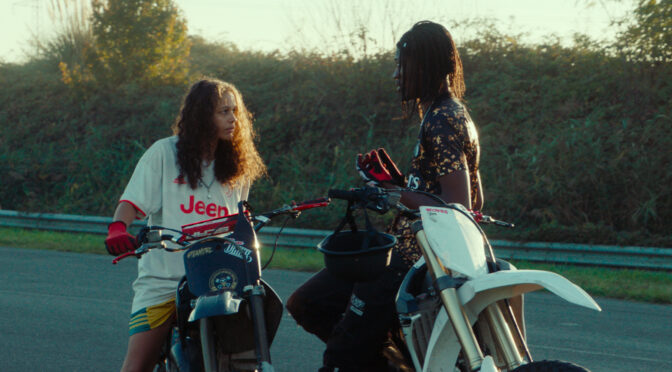 To deny the name we are given at birth is to open the door to an endless series of new possibilities and expectations. This continuous denial and reshaping of identity is what Julia, the protagonist of Rodeo by Lola Quivoron, presented in competition at the 40th edition of the Torino Film Festival, pursues.

Julia, who grew up in a deprived environment on the outskirts of Paris, finds her chance to escape from herself through her passion for motorbikes and for rodeos, a term that identifies dangerous clandestine events in the world of motorcycling where riders perform stunt-like evolutions. It is precisely at one of these events that the incident from which the story starts occurs: during a rodeo in which Julia participates with one of the many motorbikes she steals during the film, Abra – the only one to have shown any sympathy for the girl – dies in an accident. From this point begins the difficult grieving process that develops in both Julia’s psychic and social dimensions: Abra, who constantly returns in Julia’s dreams after his death, leaves a vacancy in the group of bikers (all male) to which he belonged, the B-More.

Julia then steps into this void by climbing the hierarchies and beginning a classic journey of rise and fall of the protagonist. It is precisely the way Julia climbs the hierarchies of the group that is the most interesting element of Rodeo: in fact, the protagonist introduces herself by denying her previous identity and identifying herself as ‘The Stranger’. This absence of identity allows her to perform different roles and behaviours in the various situations in which she finds herself, assuming different guises and a chameleon-like, undefinable identity. She is thus transformed into an elusive figure, a character who is difficult to pigeonhole both in her behaviour and in her gender affiliation, a figure who continually unsettles the people around her. A key element in these transformations is precisely the protagonist’s body, which constantly modifies itself and changes its outward appearance depending on the situation and the people around it.

This work on the body makes the film a work of flesh, blood, dirt and motors and gives it a fascinating visual dimension that points to an almost physical involvement of the spectator, an almost fashionable dimension in which much space is given to the link between rap music and motors.