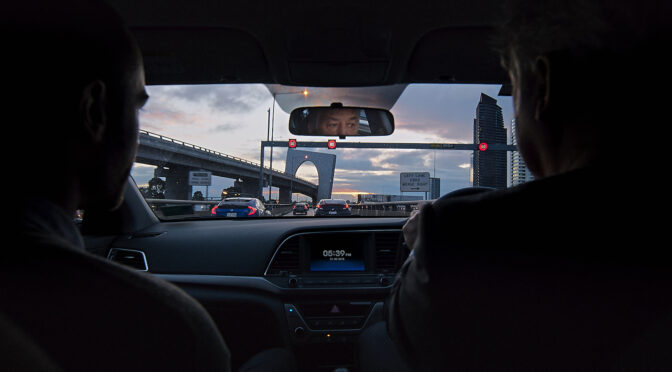 The Plains, David Easteal’s first feature film, is the Australian filmmaker’s experimental attempt to faithfully reconstruct his time spent in the car of Andrew Rakowski, a lawyer in his 50s returning home at the end of his workday in Melbourne’s outer suburbs. A work that eludes definition, a radical, yet malleable cinema verité.

During the twelve months of filming, Andrew’s life starts interfering with the screenplay, written by Esteal with the purpose of reenacting the stories shared in the four years prior to filming, but altered by more recent events, unplanned and, therefore, not recreated. Open to narrative variations but uncompromising in his staging, Esteal deprives the viewer of the two most common elements in the cinematic experience: empathy and action. The audience is forced to listen to the driver’s chatter, like a passenger stuck in the very uncomfortable backseat, unable to see Andrew’s face clearly and therefore get emotionally closer to him. The only thing left for the audience is his words. And time, dilated and ever-present in the dashboard, at the center of the frame, which acts as a constant reminder that daily life can become a ritual, and seemingly useless moments can become meaningful when they’re shared – not just with the director/coprotagonist, but with us too. If the most fitting reference, for the common choice to do without faces and action, can be identified in El Sicario – Room 164 (Gianfranco Rosi, 2010), Esteal’s work seems even more extreme in giving up any device capable of conveying the narrative (in Rosi’s film it was the hitman’s notebook, which he used to narrate his life).

A documentary-style kind of cinema that’s inherently fictional, skeletal and devoted to the narrative component – the only thing capable of holding together these three hours of runtime. The Plains is a pure storytelling experiment, that demands a high degree of empathy from the viewer, while simultaneously testing the language of film, investigating just how much in a story you can show – in this case, nothing – and how much you can tell – in this case, everything.