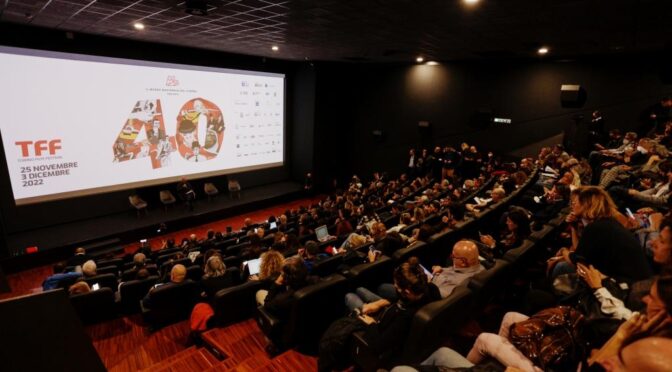 With the presentation to the press of the Casa Torino Film Festival, the run-up to TFF40 came to an end. It will begin (screenings, events, masterclasses) on November 25th with the opening ceremony at the Teatro Regio in Turin, for the first time also broadcast live on radio as part of Hollywood Party on Rai Radio3, dedicated to «a tale through music and images on the relationship between the Beatles, the Rolling Stones and cinema».

Last week, the opening press conference of the event took place at the Cinema Quattro Fontane in Rome, celebrating the important milestone of its fortieth edition, coinciding with the long-awaited emergence from the devastating pandemic nightmare.

The promoters unveiled an ambitious, varied and richly innovative program, both in terms of the films on offer and the spaces for interaction between artists and the public, laying the foundations for an edition full of expectations.

In terms of logistics, the first novelty is the Casa Torino Film Festival, which will be located in the Cavallerizza Reale, also the festival’s Media Centre, thanks to the collaboration with our University. The centre aims to become «the nerve centre of the festival where most of the meetings and events will take place», as the new artistic director Steve Della Casa presented it (in fact a veteran already at the helm of the TFF between 1999 and 2002, and one of its founders in 1982 under the impetus of Gianni Rondolino and Ansano Giannarelli). Moreover, as summarised by the president of the National Museum of Cinema in Turin, the TFF’s promoting body, Enzo Ghigo, the entire city will be involved through a «look of the city that will go beyond the usual festival spaces to dress up the squares and streets of Turin with real works of art, created by the brilliant graphic trait of Ugo Nespolo, who also signed the guiding image». A sort of urban mapping that has long been in vogue in large metropolises and is likely to appeal to visitors of all ages.

Many guests will arrive in Turin during the festival, well-known faces from show business, music, cinema and beyond. The legendary protagonist of A Clockwork Orange, Malcolm McDowell (who will receive the Star of the Mole, will be honoured with a retrospective and will hold a masterclass), Paola Cortellesi, Toni Servillo, Mario Martone, Paolo Sorrentino, but also Vittorio Sgarbi, the singer Noemi, the producer Marina Cicogna, Michele Placido, Sergio Castellitto, the former goal twins Vialli and Mancini, Simona Ventura and many others will be among the guests.

As far as the program is concerned, in addition to a competition of national and international previews divided into the feature, documentary and short film sections, a rich out-of-competition section stands out (for a total of 173 works, 81 of which are world premieres) ranging from the solo show of the young Spanish director Carlos Vermut to the Portraits and Landscapes category, from the more “committed” section (Of Conflicts and Ideas) to the New Worlds of Auteur, up to Crazies, an anthology of films on what is new in horror production worldwide, destined to send the multitude of fans of the genre into raptures.

Not forgetting Back to life (the restored films), High Noon (the misunderstood classic American westerns), the homage to documentary filmmaker/collector Mike Kaplan, and the unfailing Masterclasses, what stands out is the strongly heterogeneous character of a program aimed at highlighting first works as well as average genre cinema (plus the so-called B-series production but with cult-movie potential), trying to be «a festival that remembers the past but thinks of the future, a festival that is cultured but popular, research but fun. A festival that wants to be a party».

With a keen eye on contemporary issues such as environmental sustainability, gender violence, which will also be remembered by the event’s patroness Pilar Fogliati with the anniversary of the International Day for the Elimination of Violence against Women, the many guests who will meet the public «telling their ideas and their point of view» and the varied schedule, the director emphasizes the festival’s desire to combine high and low culture, aiming to involve professionals from the sector, the event’s loyal audience and those who, intrigued by the novelties, will be able to approach the event.