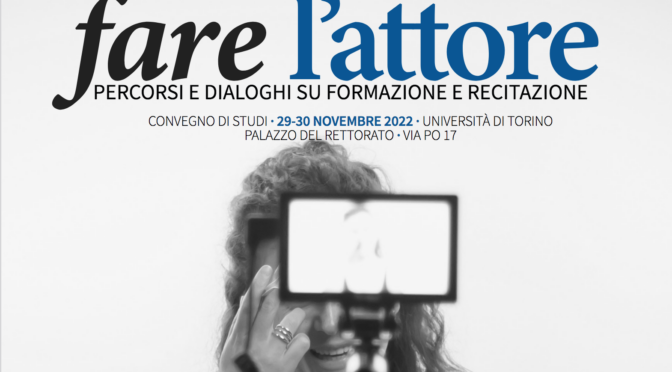 At the University of Turin, on 29 and 30 November, the study conference “Being an actor. Paths and dialogues on training and acting” organized by the “F-ACTOR” project in collaboration with UniVerso and curated by Professor Mariapaola Pierini was held. The conference is part of the research plan of the “F-ACTOR” project, dedicated to the mapping of the actor’s profession in the contemporary Italian media scenario, according to methodologies and study perspectives that refer to performance studies, studies on stardom and media production studies.

The speeches that took place over the two days demonstrated the effectiveness of an articulated array of analysis tools – from archival research to field investigations, up to interviews with the study subjects – useful for carefully examining the aspects that make up the actor’s training as a whole. The conference alternated talks by Italian and foreign university professors, with moments of dialogue with professionals in the sector, thus offering an overview that considers both the theoretical and the practical side.

With regard to the content of the talks, the presence of an evident common basis between the various training methods of the actor is striking. In fact, however distant they may be from each other, a deep knowledge of oneself is always required. A knowledge of one’s own experience, as pointed out in Shonni Enelow’s lecture on the Stanislavskij-Strasberg system. A knowledge of one’s own body, as highlighted instead by the masters Alessio Maria Romano, Sarah Silvagni and Francesco Manetti. A knowledge of the expressive mimicry of the face, a topic that Cristina Jandelli spoke about referring to the “gymnastics of the face”, a central aspect discussed in the acting manual for silent cinema by Paolo Azzurri. Moving between questions of technical and practical nature, Lisa Bode and Antonio Pizzo’s insights into motion capture focused on the importance given to facial expressions, talks that highlighted new possible conceptions of acting in digital media. Still on the relationship between acting and new technologies, Adriano D’Aloia, speaking of the use of the green screen in film sets, remarked how imagination is an essential ability to reproduce the conditions of the dramatic context, absent in the “here and now” of the performance on set. And equally also in the mimic method of Orazio Costa, as has been observed in the two talks by Laura Piazza and Marta Marchetti and Sonia Bellavia, imagination plays the essential role of identification medium.

The talk with Sonia Bergamasco also provided an example of the actor’s complex artistic training path: a constant “work in process”, in which “knowing yourself” is an essential aspect of the professional growth. Similarly, the talks with Daniele Orazi and with Laura Muccino, Nicoletta Robello, Barbara Ferrato and Paolo Manera completed the picture on the actor training, whose fundamental moments were discussed – from group rehearsals, to auditions, up to to the required psychological preparation to work in the world of entertainment.

In conclusion, the conference brought out how the assiduous and sincere study of oneself constitutes a central point in the artistic training of the actor; in turn, it demonstrated how the academic study of this topic requires an incessant update on the changing conditions of contemporary acting, in the arduous attempt to understand the unsolvable “actor’s paradox” which continues to drive important research projects.