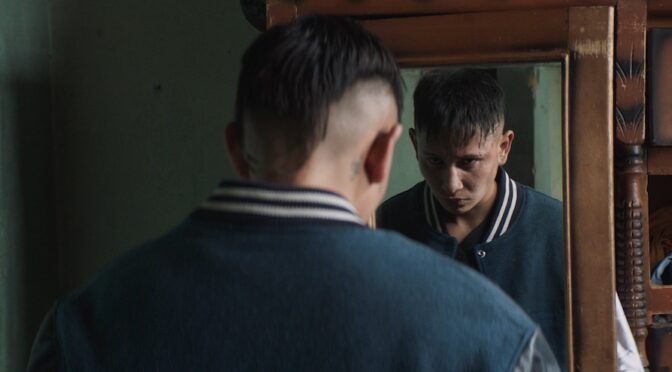 Carlos hangs up the phone and leans against the wall. His eyes are glazed over and he would like to vent but he doesn’t because, as he says, “men don’t cry.” This is the conflict that Un Varón, Fabian Hernández’s new film, sets out to investigate: that of a young man who tries to conform to the ideal of masculinity that prevails on the streets of Bogotá while in private he just wants to be himself. Christmas is approaching and his only wish is to spend it with his increasingly elusive sister and his mother, who is in jail. Leaving the youth center that took him in, he finds himself coming to terms with street life and the law of the alpha male.

Carlos’s events are inspired by the personal experience of the director, who himself grew up in Bogotá in an extremely patriarchal context. Emotions are “flaws” to be traced back to femininity and fear is considered a lack of masculinity, although justified by the dangers of the street and its “tentacles,” as a boy from downtown calls them. In Un Varón, this stereotypical masculinity hides the personality of the protagonist, played by Dylan Felipe Ramirez Espitia, discovered by Hernández on the streets of Los Mártires. Carlos’s false masculinity is the same one that distinguished Ramirez in the director’s eyes, reminding him of himself as a boy: a masculinity made up of attitudes, of clothes, which is based on the haircut (the one Carlos symbolically demands at the beginning of the film) rather than on the person’s interiority. A true gender performance.

It is in intimacy that Carlos is able to fully experience his emotions and explore his identity. As when, looking at his own reflection, he draws red lips on the mirror at his own mouth: he does not dare to try on his sister’s lipstick but uses the mirror as a double whose masculinity cannot be undermined. He has a desire to know himself but, every time he goes out on the street, this inner process is abruptly interrupted by a machismo culture that relies on homophobia, violence, and initiation rituals that are inextricably linked to crime.

The city of Bogotá is not recognizable; Hernández purposefully dwells on the places inhabited by those living on the margins of society, but without resorting to the clichés of poverty and violence. The colors and lights of Christmas slowly emerge, creating a visual contrast with the desolation of the suburbs and a conceptual contradiction with the boy’s state of mind. Carlos’s liberating cry does not dissolve the tension on which the film rests; it does not end the conflict between individuality and gender role; on the contrary, it underscores its complexity. The title Un Varón, A Man, thus has no mere descriptive purpose; it is a real seal of approval whose achievement involves the loss of self.