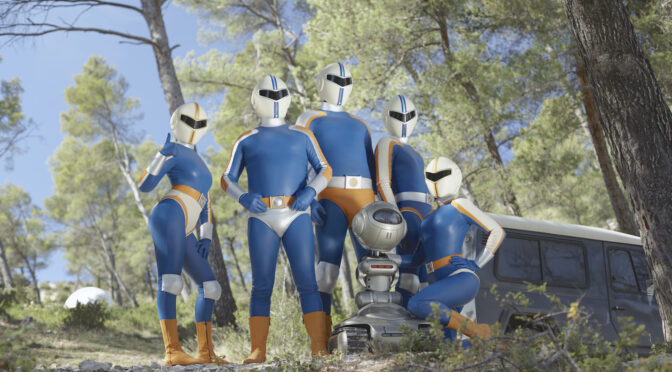 Yes, Quentin Dupieux has done it again. After the killer tyre in Rubber (2010), the jacket in Deerskin (2019) and the fly in Mandibles (2020), this time it is some eccentric horror stories – not very scary actually, rather pleasantly hilarious – that wring big laughs and dominate the scene in the latest film by one of the most absurd and paradoxical authors of contemporary cinema.

“The Tobacco Forces”, five heroes clearly inspired by the power rangers – Benzene, Methanol, Mercury, Bleach and Nicotine, headed by a nauseating Master Splinter – are used to defeat their unfair opponents, giant animals made of rubber, by exploiting the toxic elements of cigarettes to their advantage. However, due to a lack of cohesion, they are forced to retreat to an isolated territory designed to their liking – titanium beds, seawater-flavored showers and an inevitable 24-hour fridge-supermarket. Here, then, is the ideal place to give life to a highly personal and irreverent Dupieuxian Decameron, made up of mocking novellas about insulating helmets and talking human remains.

Beyond the irony and sarcasm of the stories and some surprising cinematographic references – the choice of weapon by the assassin of the story narrated by the egomaniac Benzene, filmed through a POV shot, closely recalls the way Butch selects the katana to save Marsellus Wallace in Pulp Fiction (Tarantino, 1994) -, Quentin Dupieux doesn’t forget to recount the problems that afflict our age: in this case, the environmental issue. First of all there’s the decision to entrust the salvation of the planet to a group of superheroes fully convinced that smoking is the greatest evil, an obvious metaphor for the pollution that we continue to produce; furthermore, the presence of Lézardin (Benoît Poelvoorde), a villain who intends to destroy planet Earth as it is ‘inhabited by madmen’, attests to the director’s aim. Finally, we find the tale of little Josette, a little girl intrigued by the bonfire around which the group is gathered, who narrates, through the point of view of a little fish, the disposal of toxic waste in a river.

Presented out of competition at the 40th edition of the Turin Film Festival, Fumer Fait Tousser thus stages, thanks to a rhapsodic episodic structure and through the ironic and polemical tone that has been the French director’s hallmark for twenty years, one of the major concerns of today’s society, without sacrificing the laughter that is unfailing in a sold-out theatre.