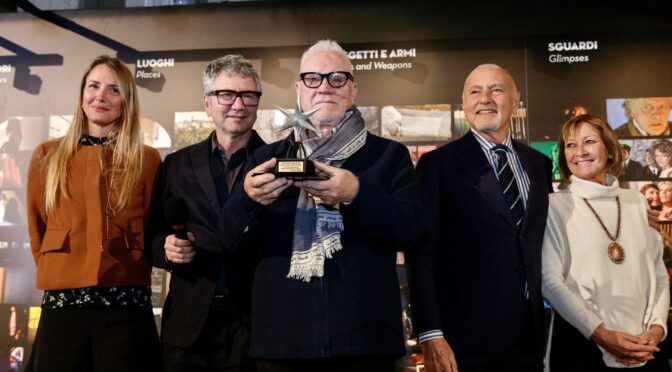 Honoured by the 40th Turin Film Festival with a retrospective and awarded with the Stella della Mole prize, Malcolm McDowell has been one of the best-known British actors in the world for more than half a century. In particular, for his unforgettable performance as the sadistic and violent Alex De Large in Stanley Kubrick’s A Clockwork Orange (1971).

It is difficult to talk about such a popular but atypical figure without repeating what has already been written about him over the decades. McDowell has never been a canonically understood star or even the darling of a specific season or cinematic current. Nevertheless, he has been able to traverse a variety of narratives in European and overseas contexts throughout his prolific career, often guided by great auteurs.

After gaining experience in the theatre, he made his debut in 1968, immediately starring in one of the last peaks of British Free Cinema and a Palme d’Or at Cannes, Lindsay Anderson’s If… (and with this director he would repropose the character of Mick Travis in a sort of truffautian cycle in the following O Lucky Man! in 1973, and Britannia Hospital in 1982). After the unjustly forgotten Figures in a Landscape (1970), an en plein air dystopian film directed by Joseph Losey, Kubrick had no hesitation in calling him out. The ineffable tenderly childlike gaze capable of transforming itself into a perverse grin with the mere hint of a smile was indeed truly unique and terrifying, and embodied the very essence of the very young criminal from the pen of Anthony Burgess.

Having attained his place in the pantheon of the seventh art (not without courageous sacrifices – just remember the serious corneal injuries suffered during the endless filming of the famous ‘Ludovico technique), McDowell’s image was marked for better or worse by those dazzling beginnings, failing to follow up on that first happy season. However, by stubbornly getting back into the game from the 1980s onwards, he was able to start a prolific second professional life, carving out a space in which to express his versatility, often in secondary roles, but always leaving a personal mark beyond the actual merits of the films.

We remember Cat People by Paul Schrader (1982), The Assassin of the Tsar by Karen Shakhnazarov (1991), Gangster No. 1 by Paul McGuigan (2000), Evilenko by David Grieco (2004), a couple of Altman and Mike Kaplan’s tasty one-man show Never Apologize (2007) to remember his friend/mentor Anderson in his own way. We tasted this ability as a performer also during the festival, in a masterclass full of anecdotes and brilliant jokes and, again, in the witty presentations of the films on offer, demonstrating a verve (79 years old and he looks great), the charisma and at the same time the affability of the star capable of involving even the youngest audiences.

The Turin prize helps fill the gap of the far too few awards given by the film world to McDowell (he was snubbed by the Oscars and the Baftas, he had a single Golden Globe nomination, a special European Film Awards, and a special Nastro d’Argento), but meeting him in person allowed us once and for all to dispel the evil aura that surrounds his cinematic double: Malcolm was never Alex.