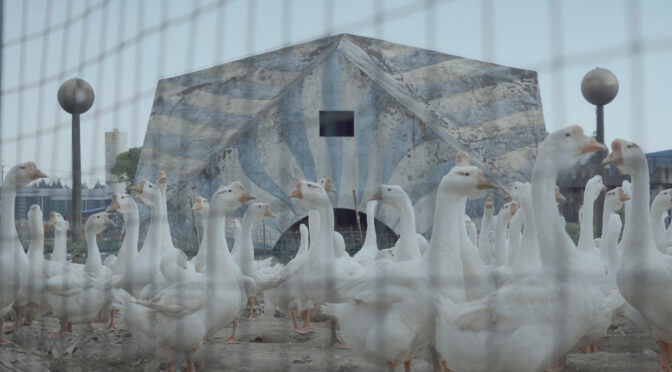 In an essay on the link between reenactment and fantasy, Bill Nichols reflects on how this technique underlines the gap between past and present, but also between the subjective and objective perception of events. In this way, it creates a surreal dimension that nullifies the idea of total objectivity highlighting its impossibility. In Parkland of Decay and Fantasy, presented in the TFF40 International Documentaries competition, it is the digital image that performs the function described by Nichols through the use of new technologies and especially their capacity of altering images, as in the case of the visionary finale, where the visual evocation of ghosts is at the centre of the narration of Parkland of Desire and Fantasy[1].

It is the two sequences before the title that dictate the themes of this documentary: a man, shrouded in darkness, tells the story of the death of a painter who lived within a commune of artists settled in a decayed amusement park, the actual protagonist. Years later, a couple goes there to make a live stream and show the world its ghostly atmosphere. However, none of them appear in those digitally mediated images from the screen of one of their phones. We follow their path, first through the digital images of a GPS map, then through the camera of the boy making the video when suddenly his girlfriend disappears in the park. Is this a real event, a reenactment or was it simply invented? It is hard to find an answer.

With these two sequences, we officially enter the decayed amusement park. A paranormal place, according to the director, capable of acting as an antenna picking up souls that got out of their bodies, like phone messages from dying people. And maybe that’s the intent.

It is this reflection on the subjectivity of reality, to the detriment of documentary canonical presumption of objectivity, that constitutes its focal point. Chenliang Zhu work is about a place where subjective reality materialises. Through the use of digital technology and its possibilities of modifying reality, he manages to challenge the idea of classical objectivity. Despite the fact that this notion has already been questioned multiple times, with this feature he takes a drastic stance going even deeper into the question by making a documentary in which mental plane and phenomenal reality are constantly interchanging.