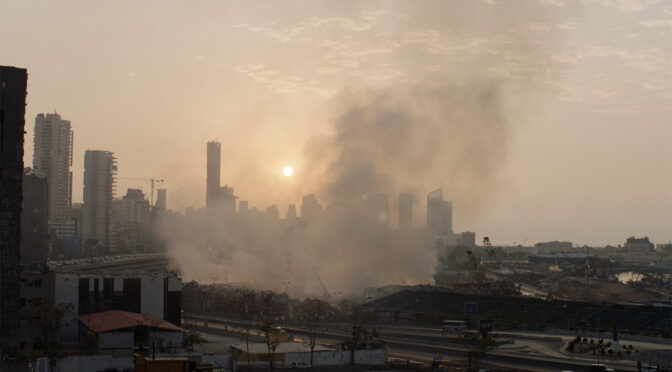 On August 4, 2020, a massive explosion destroyed the port of Beirut, killing 220 people and injuring 7,000. The day just before that, director Karim Kassem had arrived in the city’s port area to shoot a film he will never make, Octopus. In its place is this Octopus: the title remains, but it is a completely different film. It is the symphonic lament of a city left voiceless.

The Lebanese director’s feature film is silent: the only thing resonating, instead of the characters’ vocal cords, is the shockwave from the explosion that devastated an entire section of the city. We can’t hear the sound, but it still lingers loud through the images, as some sort of sonic off-screen. The will of Karim Kassem, who also risked death on that same August 4, 2020, was to narrate the painful, unreal scenario in the aftermath of the event. He did so by combining the immediacy of the urgent observation of the event, with his great formal precision. For the director, the most fitting filmic grammar for enunciating such destruction is that of long, sustained (fixed-camera) shots, coordinated – in the best documentary tradition of metropolitan symphonies – on the basis of formal analogies. The city is symbolically caught in an endless sunset; often it is that melancholy light that leads the phrasing from one shot to the next.

The human element remains nonetheless, condensed in the pose of people presenting themselves silent at the lens: on their faces a physiognomy of shock and pain emerges, to which nothing needs to be added. The slow, meditative viewing of Octopus is a sensory immersion that is increasingly rare in theaters nowadays. The film begins inside a house and inside a house it ends. In between, the spatial investigation of a defaced cityscape: since all doors and windows exploded, there are no degrees of separation between inside and outside. It is in this open visual terrain that Karim Kassem’s vivid gaze enters.