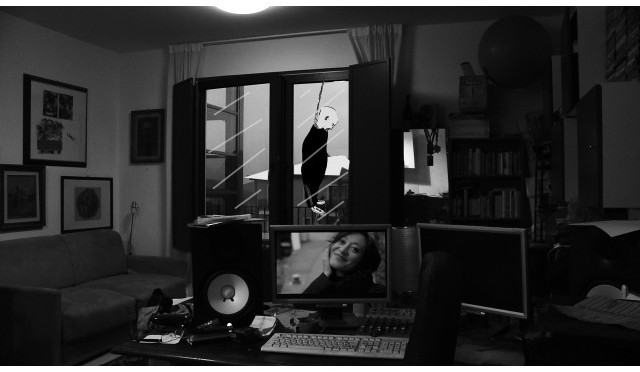 The Italian section of TFF DOC opens with ‘Habitat – personal notes’ (Habitat – Note personali), with which Emiliano Dante returns to the festival after his debut, five years ago, with Into the blue.

His goal is the same: to film the urban tragedy of L’Aquila. The main characters are the director himself and his former tent-mates: Alessio and Paolo.

Emiliano lives in one of the houses built by “project C.A.S.E.”. His girlfriend, Valentina, still lives in her old house; Alessio is a real estate agent and lives with Gemma in a house where they pay a low rent, since the earthquake damaged it. Paolo, who has become a painter after the tragedy, does not know what to expect from his life and from his daughter’s birth.

Everyone opens up sincerely to their friend Emiliano, behind the camera, without filters or victim complex: they are just hopeless. They are afraid of this ghost city, and some of them have tried to follow their friends, emigrating; but something has made them come back. “What do you dream of, Emiliano?” is a question that seems to look at the future, but it is actually the same old nightmare: the earthquake.

A peculiar documentary that does not open with a banal overview of the city ruins, but with the characters driving the 14 kilometers that separate them from the city. The new houses were built quite far from L’Aquila, in order to ease the reconstruction of the city center; but the clothes hanging from the balconies reveal that the clock has stopped on April 6, 2009.
A black and white movie to represent a city forgotten by the media, where there is nothing left to do. Emiliano Dante, producer, director, scriptwriter and actor reveals the loneliness and the dereliction still felt in L’Aquila. “I don’t want to conclude with an overview of the torchlight procession in memory of the tragedy” says the main character, “because here in L’Aquila we feel lonely”. A sincere and intimate look, far from a political critique.