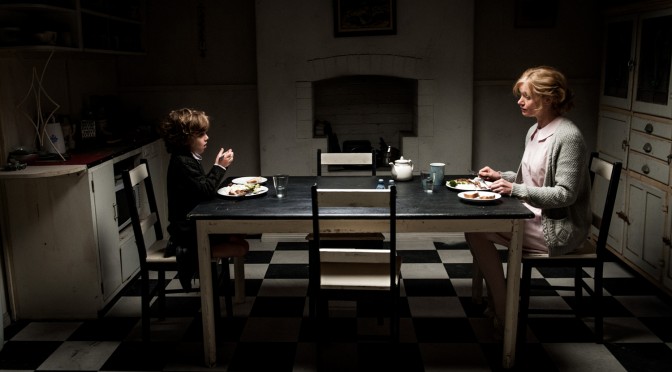 After the success both of the critic and the audience at the Sundance Film Festival, The Babadook, first feature film by the newcomer Jennifer Kent, participates in competition at the Torino Film Festival. Even by following with absolute rigour the classical phases of horror films with a possession subject (the monster, the kid who plays with the presence, the mother initially incredulous), the Australian film cleverly avoids banality giving a new point of view, certainly in a more psychological and deeper way than numerous other products of the same genre.

The Australian version of the Bogeyman Babadook torments unaware victims who read aloud the book “Mister Babadook”, wonderfully illustrated by Alex Juhasz, by magically materializing in the houses of the unfortunates. The effect is immediate: “once you have invited him, you can’t get rid of him”.

Putting aside for a moment the supernatural aspect of the film, the motor of the action is linked to the smart work of a female direction, which is attentive and sensitive to the internal dynamics of the individual characters. What scares us is not the monstrous creature, but the desperation of a widow forced to live her life with a son that she considers the real cause of her husband’s death (the mortal accident happened during the car drive to the hospital the day of the delivery) and deals with the rejection of the middle-class society. In fact, the film portrays an atypical family not accepted, with a single mother who divides her days between her son with relational problems, an unsatisfactory job and a difficult economic situation.

Despite some unclear characters and the ample space for manoeuvre left to the audience’s fantasy, the film keeps the viewer’s attention: the dread is suggested, but never revealed, and the photography reminds the masterpieces of the genre’s origins, guiding the eyes of the audience to the real resolution of the film.

The Babadook is the evil that everyone drags inside, it is the feeling that a mother cannot feel towards her son, a not-elaborated loss, the eternal repetition of the present. Even with a slip-up in the ending (exaggerated screams, bodies thrown against the walls and convulsions in the style of The Exorcist) the film places itself in the free zone between psychological thriller and horror. Kent thinks that evil, in its dramatic regularity, can be tamed, becoming part of our life, and maybe inheriting it in the future.