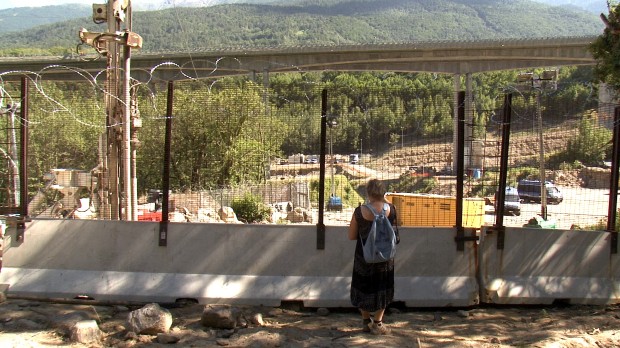 “Qui” (“Here”): a simple word composed of only three letters.

Anyone hearing this word gets confused, with an unconscious question mark impressed on their forehead, because that single word doesn’t explain the theme of the film. However, since the first scenes we understand that this adverb, “qui”, is related to a place, a specific location in Piedmont: Val di Susa. Everyone knows at least something about the thorny matter of TAV, or rather NO TAV. Sincerely, I expected grouches and quite irascible characters, but I made a mistake. In fact, the first protagonist chosen by Daniele Gaglianone (the director of La mia classe, I nostri anni and La ferita, his lasts film) is a middle-aged woman, a smiling pilgrim who goes every day to Chiomonte because of religious reasons. Unfortunately, since the construction site for the Turin-Lyon high-speed train started, part of her itinerary has been closed with an unusual barbed wire fence used only in Israel, so the woman is forced to walk.

Gaglianone introduces ten Val di Susa’s people, who suddenly have been surrounded by building sites, new insurmountable boundaries, and the commitment to exhibit their ID’s many times to functionaries; no matter if their houses are close and previous to those new fences. We don’t know the names or something else about the characters; we know just what they narrate during the interview. There is the Radio Blackout speaker who recalls the tragic moments during a police’s riot attack: he wanted to describe what happened but he couldn’t speak with the gas mask, so he removed it and tried to breath in spite of tear-gas. The mayor of Venaus says: «I was on my citizens’ side, knowing to be on the State side: on the other side (with reference to the police during the attacks) there was something more».

And there is even an old nice lady, a farm owner in this area “NO TAV”; she recalls her protest against the demolition of a house: she chained herself, with handcuffs bought in a sex shop, and she didn’t even know how to open them.

“Qui”, narrates histories of “normal” people, citizens that demand justice to a State who never asked them anything about the TAV project, a State who destroys their land and puts in danger the health of everyone (everything written in the official project), and moreover, a State who «deletes the human dignity linked to everyday life».

This documentary is surely “biased” but it would be helpful and educational to broadcast it on network at national level, where the NO TAV supporters are usually presented like violent and irrational people.

Maybe we can understand why these people rise up against TAV. This problem does not concern, only, Val di Susa’s area because, as Gaglianone explains: «the stories reveal, behind the urgency of the event and the modernity, a dimension that goes beyond the triggering causes of the conflict. So, “qui”-“here” is not elsewhere: it is everywhere».

And that is why everyone should be interested in it.