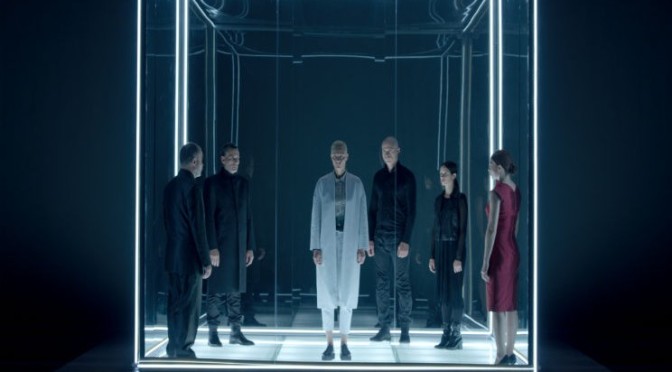 In aesthetic terms “Catharsis” means purifying the human passions that are understood and overcome with art. However, this word comes from Ancient Classic Greece and is connected with a sort of religious ritual that requires to purify both body and soul. Nowadays Greece is facing a cultural and social crisis: in few words it is an adrift country. Despite this, Greek cinema is constantly focusing on this national crisis and ready to supervise its flow. There is no real school of contemporary Greek cinema but there are several common artistic trends in these Greek movie makers.

Interruption is the first feature film by Yorgos Zois and without doubt follows this trend. This film starts with some out of focus lights blurring in a dark space. These lights stand for something not clear but alive that is going to bump soon into an unexpected future. This obscure element is actually an ancient man who’s completely naked. There’s a young blond and short haired woman with him. Those lights we have noticed at the very beginning of the film are actually Clitennestra and her lover Aegystus. Nonetheless the old man and the girl are Agamemnon and Cassandra. The starting events of The Oresteia are well known: the queen and her lover will kill the king who has come back to Troy after many years with another woman. The clash between Cassandra and the new masters of the palace occurs in a glass cube in the middle of the stage. According to mythology there should be then Orestes coming back from his exile and his vengeance versus his mother. Anyway the performance is suddenly stopped by a group of young people running through the stage and telling us they are the Chorus. Their leader is a black haired guy with an amused smile who takes some people from the audience as volunteers. They will introduce themselves and take active part in the show.

“What’s happening here is fiction or reality?” this is the question made by to a member of the Chorus to a girl.
“It’s the reality” replies the girl but she doesn’t look very convinced. The wonderful event this movie is trying to show is the theme of being guilty putting it aside for a while and playing it without misleading it. Now it’s high time to recollect Pirandello.
This movie is about a nowadays issue. At the end the young man kills himself while the theatre audience stands up thinking the tragedy came to its end. He’s another victim of nowadays spread indifference. It’s time that the actors and people taking part in the tragedy take off their clothes as a metaphor of their shame. But if they purified themselves and cleansed their guilty souls what about us and our Catharsis?