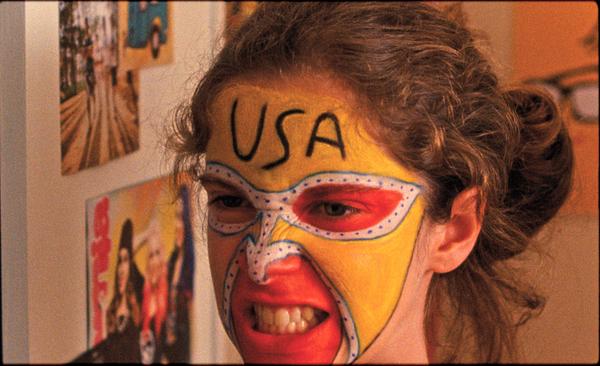 Translation by: Martina Taricco
Teens years are the most beautiful and the worst moments of everyone’s life at the same time: this is a classic cliché with which you never know if to agree or not. Certainly, we usually think that adolescence years are those in which our dreams start to take a more real shape and run off the rails of childhood towards the tough reality, an almost inevitable course from adolescence to adulthood. In the movie of João Nicolau we see the exact opposite of what written above.
The protagonist is Rita: she is fifteen years old and lives with her parents in a huge and odd apartment building where blue prevails. Blue are the lift doors, the mailboxes, the balconies railings. Blue is the perfect colour for the summer during which the movie is set. Perennially on the edge of boredom that is going to submerge her, Rita spends summer walking through the city, playing the pipe organ in a recreation centre and going to parties with her friend, who lives in the same building with which she exchanges some messages written on slips of paper that they hide in the lift.
To break up the monotony of this hot summer, a new neighbour comes: a man who is about thirty-five with his little daughter who has to provide for. His name almost eludes the audience attention because very soon, this absent-minded photographer calls the attention of Rita. Nonetheless, the girl does not see him as he truly is but as the character of the title, John From.
Aided by the fact that the photographer is exhibiting the pictures that he shot in Melanesia, Rita starts to imagine him as the god John From that, according to Melanesian legends, is described as an American soldier “fallen from the sky”. Rita connects this legend to her new neighbour, fallen from the sky as well, like a blessing or a potion against the boredom. Therefore, the attempts of Rita to approach him begin but they all end in inconclusive meetings.
In the midst of her daydreaming, Rita starts to mix up what really happens with what she would like to happen; the boundaries between reality and imagination becomes more and more weak until they merge together. It is therefore difficoult to distinguish the reality from the dream, so that when we are in love, an ordinary wave becomes a sign of fate. Rita plays a game: she questions her iPod, close her eyes, browse the songs then she stops at random and the title of the song should tell her the answer to her question.
Nicolau shows us this adolescent world in a disenchanted and realistic way, dressed up with a touch of irony that could make the movie irresistible. A world in which the parents are distant but caring all the same, teenagers are mature thanks to their experiences and disappointments and an ordinary crush could turns into an endless dream of a wedding and beach games.