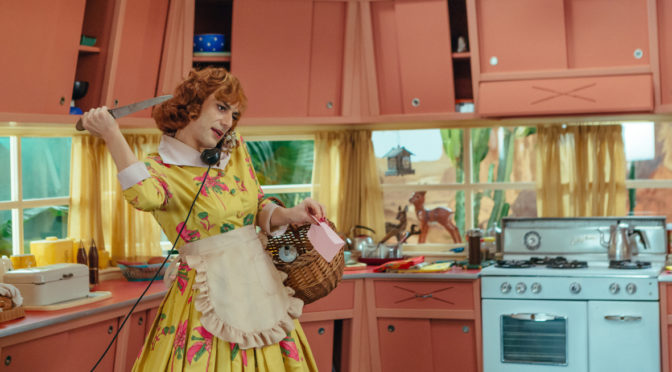 A housewife wearing a dress from the Fifties comes down a pastel-colored spiral staircase. She cries out a name: Lady. The woman is desperately looking for her interlocutor, chatting nonstop while walking around the room. It looks like she is talking with a real person, but Lady is actually a dog, and a stuffed one no less. There’s not much to talk about with a lifeless animal. This is the first sequence of Favola (“Fairytale”) by Sebastiano Mauri, a film that astonishes the viewer from the very beginning.

The main character of this modern story is Fairytale (a female character played by male actor Filippo Timi). She’s a woman who lives in the Fifties: on the one hand, she is crushed by the principles dictated by her misogynistic society, which denies women any kind of freedom; on the other hand, she longs for a type of love that can only be experienced through emancipation, and that will lead her to finding herself.

The film comes from a 2011 theatrical play, conceived and realized by Filippo Timi. The element that instantly captures our attention is the setting: the main character’s life takes place solely in her own house, as it’s befitting for a perfect housewife; on the outside, through the windows, we glimpse a sketched view, deliberately fake. All the events that unfold are products of a mere fantasy, a fairytale that a man created in his own head to get rid of the male part that lives inside him. Therefore, the United States in the Fifties are actually the Hollywood from those same years, because films are the only reality that Fairytale’s alter ego knows and was able to experience directly.

The costumes, the score and the scenic design bring us back to a time when the audience used their own imagination to create a fictional far away country, apparently out of reach. Lucia Mascino who, in the film, plays the co-star Emerald, stated during the press conference that her character should clearly remind us of Kim Novak from Vertigo, with her gray pant suit and perfect hairstyle on an excessively blonde head. 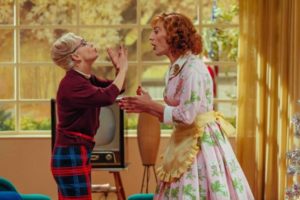 Favola’s main characters live in a world made up of lights and colors that reflect their moods. The entire narration is characterized by fairytale-like nuances: the viewer is aware at all times that nothing can be real.

“Women were forced to fall in love with the washing machine”: with this ironic statement, Filippo Timi explained why he decided to set his story during the Fifties. At the time, emancipation was but a distant dream, and the only purpose of all the Fairytales that inhabited the world was to please their man, take care of him and give him everything he needed. There was no room for their own identity: women had to nullify themselves, repressing any wish they might have to change their own condition.

Love is what pushes the main character to come into the light, to show her most secret desires and make them a reality. “Life is a farce”: this is what the main character’s mother, played by Piera Degli Espositi, says to her daughter, as she tries to defend her feelings for Emerald.

Fairytale’s tormented existence has always been connected to lies, to that world that her alter ego Stanislao built to protect himself from prejudices, by putting up a wall that could hide him, until the day he was going to be safe and sound.

The film, therefore, with its irony and irreverence, is a tribute to freedom. A fairytale that like all good night stories teaches us something valuable, without trying to lecture us. Fiction and reality come together in a comforting embrace, as we are left with only one desire: to show our own identity, whatever that might be, even the one of an American housewife from the Fifties.