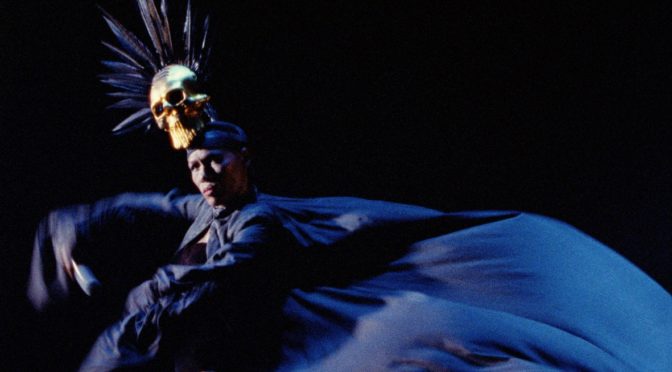 Grace Jones: model, actress, singer, icon. But who is really the Woman that hides behind her character’s mask? Grace Jones: Bloodlight and Bami begins this way: with the main character taking off a mask, revealing a face with harsh and androgynous traits, to the tune of Slave to the Rhythm. To a fan who asks her when she is going to star in another film, she answers that she’s already got her own.

Director Sophie Fiennes gathered the material for this documentary during the course of five years, closely following Grace on her trips between Jamaica, her birthplace, and Paris, her adoptive city. The result is an intimate, although fragmented, glimpse in the life of an artist who highly influenced the ‘80s pop culture. At times, the documentary stops to leave room for magnetic performances of great visual intensity, almost becoming a concert movie. “I’ve learned so many things about her that made me understand the way she imagines her performances. This allowed me to film those sequences in full knowledge of all the facts”, recalls the director during the press conference that took place on December 1st. She also tells how in the “object of her study” she found a fantastic creative partner, with a deep knowledge of herself. “She was the one who decided what she wanted people to see about her as a human being, and it was important to me that this side of her came out together with her as a performer”. The director’s eye is never inquiring, but only a silent spectator that reports excerpts of the artist’s life and her conversations, sometimes even intimate and private ones.

Without resorting to file footage or interviews, as it’s often the case when it comes to documentaries about women in the show business, Sophie Fiennes shows us Grace Jones here and now. “In my mind, I wanted to create a documentary using only my filming, always with the goal of seizing the best from every single moment. When the editing started, I became a sort of “pathologist”, examining the material. And it’s the material itself that guided me with its urging: what the material can accomplish is often more exciting than what a script can do.”

Although her daily life might appear quite insignificant, the camera manages to capture many surprisingly cinematographic moments, such as the image of the artist wrapped in a fur coat, standing on the threshold of a hotel room balcony while watching the Paris skyline. The film, with its simple structure alternating performances and everyday life footage, owes a lot to how photogenic Grace Jones is and to her stage presence even when she is not performing, like when she’s just in an Evangelical church in Spanish Town, surrounded by her family, wearing a patterned hat.

A face and a physique that look like they were made to be immortalized by the camera. A woman of exceptional grandness that reminds us of big divas, like Edith Piaf, while sipping champagne for breakfast, showing at the same time the simplicity and loneliness of an artist. “The true essence of the movie industry is the fascination with a human being”: and surely, Grace Jones keeps captivating us, while remaining enigmatic and never reducing herself to just a woman or just an artist. It is possible, after all, that one part cannot exist without the other.