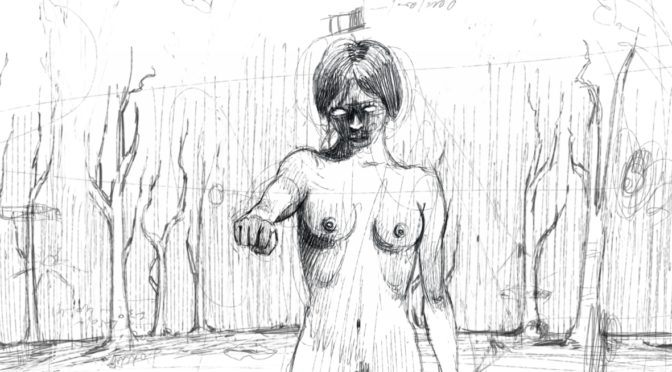 The series of short films entitled Straordinarie Avventure within the section Italiana.Corti revokes one of Emilio Salgari’s novel: all of those six short films, indeed, deal with a physical or metaphorical journey, a discover of the unreal through the image.

Opening the series is Robhot, an out of competition short film by  Donato Sansone, entirely hand made. The plot is extremely simple, as the director said: it is about a fight that pays homage to the Japanese robot animation of the 80’s. It is a work that has seen a very long genesis: started in 2013, abandoned for a very long time, then took again and finished thanks to the French production’s will. The animated style of this work is irresistible, due to the use of scratching and the ending is hilarious.

Dealing with the sci-fi universe is also Blue Screen by Alessandro Arfuso and Riccardo Bolo, a project carried out thanks to the Zavattini Award assigned by Aamod. The film is composed by a remarkable employment of found footage, that creatively mingles footages in order to build a fictional story through the use of the voice over. An interesting experiment that demonstrates that it is possible to reuse prior materials for a narrative purpose.

As the title suggests, Alberto Tamburelli’s movie, Fine di un amore (End of a love story) brings to the stage a couple of lovers who committed their lives to steal and freedom. The performance of the actors is not enough satisfying and these words of them are limited by the voice over; the tidy frames are appreciated and emphasise the landscape and the nature through the use of a steady camera.

Giorgia Ruggiano joins the competition reporting the isolation of Ida, an old woman who lives in a crumbling apartment with her pigeons. Her peace is interrupted by her daugher’s will to refurnish the place and stop the entrance of the birds, the woman’s only solace. A character to whom the audience gets immediately attached, a touching portray of the loneliness.

Once again, as the title suggests, Danilo Monte’ Il viaggio di nozze records his honeymoon in India, marked by the desperate attempt to conceive a child with alternatve techniques and a constant headache. The documentary hint- which offers nice images of the Indian landscapes- is blent with the intimate one, in a original and engaging result.

Closing the series is the braviest of the six movies: Dagadòl by Mariachiara Pernisa and Morgan Menegazzo, that tries to get the esoteric and primordial power of the image back, to reveal the invisible through tightened connections, in open conflict with the excess of image- goods that fill our modern time. A kaleidoscope in which the audience indulges and reaches the unconscious.