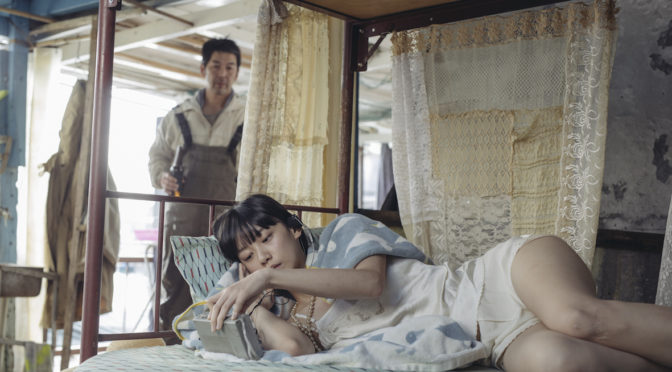 A young girl (Angela Yuen), who is allergic to sunlight, is obliged to live with her father in a fishermen village in the vicinity of Hong Kong; her physical and psychological discomfort is soothed by the meeting with a mysterious Japanese traveler. An uncommon and out-of-the-box relationship will spark between the two.

Competing in the 35th edition of the Torino Film Festival, “The White Girl” marks the return of the great Australian director, naturalized Chinese, Christopher Doyle in Turin – during the previous edition he was awarded the Gran Premio Torino; young Hong Kong producer Jenny Suen also co-directs the movie. As stated during the press conference, “The White Girl” was supposed to be a short film but, after a discussion, her and Doyle decided to make it into a movie.

Doyle needs no introduction, being one of the greatest directors of photography in the world, known worldwide for his partnerships with another legend of Asiatic cinematography: Wong Kar-wai. “The White Girl” share some typical characteristics of Wong Kar-wai’s works: for instance, the use of the voice-over as an instrument of introspection, but also the great attention to space. Doyle himself, during the press conference, has highlighted the importance of space (in relation to the positioning of the characters) in his movies, However, there are some difference between the two of them: in Wong’s movies, the space is claustrophobic; while in Doyle’s works, space is synonymous with life.

One of the most interesting aspects of the movie is its sumptuous photography. Doyle is a master of lighting, he possesses a great aesthetic sense and his scenes (with a prevalence of wide shots with a fixed camera) are veritable “tableau vivant”, standing out for their incredible refinement. 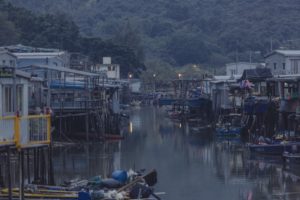 “The White Girl” is not only an aesthetically exquisite movie, but it also deals with social issues: the village of the movie is actually a metaphor for a disappearing Hong Kong, a city that is losing all of its traditions, due to capitalism, gentrification and an exaggerated urbanization. As a result, its people feel lost and lacking identity. Producer and co-director Jennt Suen stated that the protagonist is actually Hong Kong itself: a ghost.

As previously stated, the movie tells an unusual love story, which has been played out in a very original way. The girl and the foreigner – who is a very interesting character, resembling the typical hero of western movies: a loner, mysterious, with no fixed abode – never touch. A simple shot reverse shot in enough to highlight their love. It’s a timeless romantic relationship, whose ending takes a needed pessimist turn: the ghost girl won’t follow his lover because her duty is staying in Hong Kong trying to preserve what remains of culture that is abundant with history and traditions, as difficult as it is.

Doyle and Suen put together an amazing cast: the protagonist is a rising star in her local scene – she is called a “hipster goddess” – while Joe Odagiri, who plays the mysterious traveler, is a star of Japanese cinema, and has worked with names of the caliber of Kiyoshi Kurosawa, Sion Sono and the great Seijun Suzuki. The supporting cast its also interesting. Michael Niag plays a corrupted politician, and Tony Wu is one of the villagers: they’re both well-liked by the general public and have both starred in noteworthy movies.

“The White Girl” is a movie that is romantic at times; it’s timeless and its images go straight to the heart.