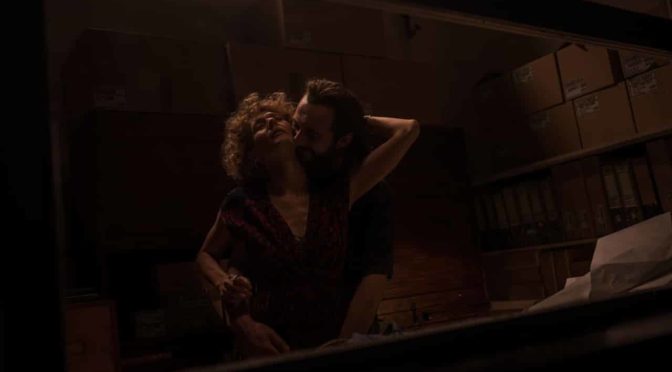 An explosion is a rapid and localized release of energy, mainly consisting in an exothermic decomposition of explosives, generally following an ignition; or in the sudden and fast expansion of a compressed gas. It is followed by significant effects due to the transformation into mechanical work of the energy released. If the explosion interacts with obstacles, the more the surface invested is and the closer it is to the centre of the explosion, the greater the energy exerted on themselves is. Which means that, if a bomb explodes close to a man’s body, it will be completely disintegrated.

Readers, try now to imagine your husband, your wife or the closest person to you in the proximity of a bomb. Are you scared? Are you worried?

These are the questions that the Polish director Eva Bukowska represents with her first feature film 53 Wojni (53 Wars), in competition in the feature section of the 36th Torino Film Festival. The protagonist, Anka (Magdalena Popławska) works in the World Bank and she is married to the war reporter Witek (Michal zurawski), busy recording the fall of the USSR, from the wars in Yugoslavia to those in Chechnya, Georgia and the following ones.

Anka plays the role of a Penelope who is constantly waiting for a phone call from her husband to reassure her that he is still alive. However, this situation becomes immediately unbearable: the constant fear of losing the love of her life, the father of her two children, wide opens the doors of her subconscious, where the most frightening fears lie.

While her husband experiences the war in the trenches, she undertakes a war against herself, in a house who has turned into a narrow and limiting space in which, at one point, she stops moving, setting herself between the wall and a kitchen furniture.

Anka suffers from post-traumatic stress disorder: in order to identify with her character, the actress, along with the director, listened to numerous stories of soldiers returning from the war. And this is what allows her to masterfully identify with a character who is at the same time complex and fragile.

Putting himself in the protagonist’ s shoes, the spectator directs his glance on something that is as hidden as it is frightening, finding himself in a claustrophobic and vicious circle,  with only one important question: who will be the winners and the losers of these battles?