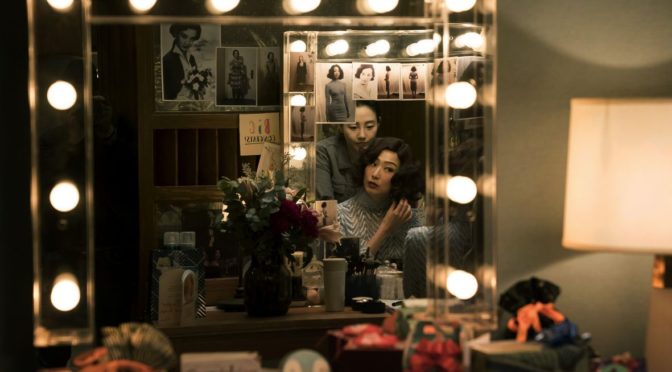 Director Stanley Kwan doesn’t need introduction. First Night Nerves represents for the director, who grew up during the Second New Wave of the Hong Kong cinema, a chance to come back home after a long absence. Even if many sequences have been filmed in a sound stage, the city plays a marginal yet fundamental role. The director sets the scene of the fictitious play Two Sisters in the Hong Kong city hall, for which a demolition proposal has been recently put forward. The director’s choice is a declaration of love for this building, where he spent a lot of time directing plays or taking part in film festivals.

It takes a few minutes for the occidental viewer to fully grasp the film, an intricate melodrama where the stories of the main actresses, Yuan Xiuling (Sammi Cheng) and He Yuwen (Gigi Leung), intertwine with the secondary characters and their backstories.

The world the director creates is so perfect that the viewer gradually finds himself empathizing with the secondary but interesting characters, who slowly reveal themselves in front of the camera. This is possible thanks to the small narrative details, which make the sequences feel deep and real. When Yuwen meets her former director (and maybe ex-lover), a simple pair of sunglasses becomes symbol of the inability of the man to look Yuwen in the eyes, suggesting a lack of equilibrium in the relationship. The small red glass marble, that Xiuling holds in her hand during the play, will later become a love token.

Real life and theatrical play, blend into each other in this endless coming and going of different stories. As on stage the character played by Xiuling talks to the spirit of her dead husband, the woman comes to terms with the death of her unfaithful lover in a three-level narrative exchange. What happens on stage, represents a sort of revelation for the characters on screen, who make the viewers wonder about the possible interpretations of what they are seeing. Despite its intricate structure, the film results into something light and enjoyable thanks to emotional slow motions, fast jump cuts and catchy pop songs.