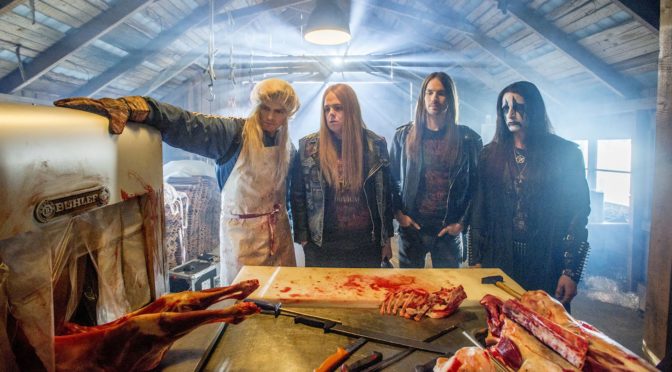 The real essence of humour is very difficult to understand and, very often, many movies with humorous purposes seem to be unable to reach their goals. Telling a simple story, making it meaningful only with humour is a particularly complex operation.

I’m making this introduction because Heavy Trip, Finnish movie presented in the After Hours section at the Torino Film Festival, first of all, gave me the impression of being totally and happily focused on humour. On a cold morning in Turin, together with a laughing and clapping audience in theatre 1 at Cinema Massimo, I grasped an irony that preceded any other possible reasoning on the film.

On the screen, in a close-up, we can see a reindeer crossing the road and, in the distance, out of focus, the main character walking and dragging his rusty bike. The premises are pretty clear: the protagonists of this odd story will be Finland, its distinctive landscape, its animals and the people who live there.

A Heavy Metal band tries to make a name for itself in a small village far away from us, where “loud” music is not common, where people who have long hair are considered “homo”, and, more importantly, where the stereotype tends to creep into everyday life. Heavy Trip has all the hallmarks of a road movie: the band follows the dream of doing a concert in Norway and will be willing to do anything to reach its destination, finding itself in very unlikely situations.

The irony of the film is simple and irreverent at the same time, and the spectator finds himself laughing at situations that he probably would not perceive in the same way in real life. The screenplay makes constant reference to the stereotypes about Heavy Metal and aims to make the main characters look funny and ridiculous, dispelling all the still persistent myths about this kind of music. Therefore, there is a reversal of positions: those who feel superior and in the position of ridiculing the others are shown here in a comic and farcical way. Thus, a comedy of misinterpretations takes place, where the misunderstanding becomes the element which provokes the laughter. The prejudice and the stereotype turn the characters into caricatures. So, for example, it may happen that the police mistake a group of masked boys who are celebrating a hen party for terrorists.

The sequences in which the band plays in the basement are assembled like a real metal videoclip, with details of the fingers moving on the bass and close- ups of a caged doll hanging from the ceiling. When the spectator is involved in a visual and auditory climax, the myth is going to crumble, as soon as the mother tells the boys that the reindeer dinner is ready. The idea of tough-looking “metalheads”, that frighten those who met them, is constantly overturned by the mild-mannered and almost compliant character of the protagonists who, overwhelmed by the events, carry out accidentally rebellious actions.

Each character is characterized to the point of becoming grotesque, and the spectator has to immediately distinguish the “good” from the “bad” guys. A narrative structure that may almost appear ordinary, but that never looks obvious thanks to the humour that supports the entire story in an excellent manner. Everything is the opposite of what it seems: the authors of Heavy Trip have taken literally the meaning of “irony”, understood as concealment, “feeling of the opposite”, giving to the audience a simple and funny comedy that is able to leave you with a smile even after the ending credits.