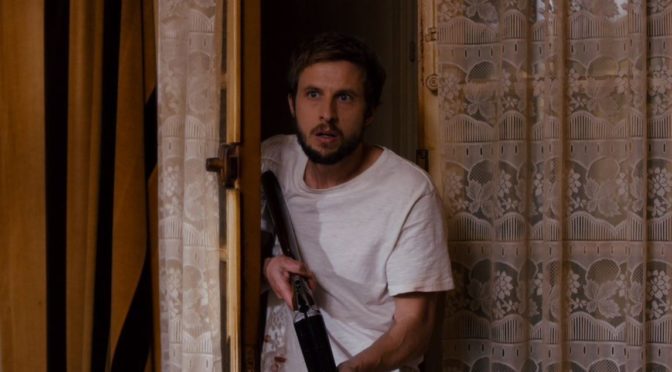 In 2018 the image of the zombie is so ubiquitous in our media that it partly lost both its critical strength and its ability to scare us. Cinema, television, comics and video games exploited the figure of the living dead so much that it has become difficult to create something new. Dominique Rocher gives it a try by relegating this figure to the sidelines of his horror story. Of course, zombies are abundant in his movie, but they seem to be just a pretext to isolate the protagonist, Sam (Anders Danielsen Lie), in a lonesome captivity inside a Parisian apartment. It is the solitude, in fact, the real co-protagonist of the film. Overwhelming and empty silences that freeze the heart will accompany the last human during the long months of his survival, forcing him to find new ways to fill time and more importantly to stay sane, because spending too much time alone all by ourselves, we are all destined to go crazy. Unable to distinguish between reality and hallucination, Sam becomes his worst enemy, adopting a series of increasingly self-destructive attitudes, always trying to find new ways to remember himself he is still alive and is different from the creatures that surround him.

Maybe I’m forcing my hand a little, especially since the film is based on a novel that I only know superficially, but I believe the protagonist’s attitude could be read as that of a person who is going through a period of great depression. Following this interpretation, we can identify what happens in the prologue of the movie as the triggering cause: Sam is in the apartment of his former girlfriend to take back some old cassette tapes. Here, she has organized a big party with her new boyfriend and friends. Seeing her happy and in love without him makes the young protagonist drift away in search of solitude. He falls asleep in an empty room, inadvertently saving himself from what appears to be the end of the world (or his world). Perhaps, it is only a dream, a delusional elaboration of the conclusion of his story. What is certain is that Sam’s attitude towards the apocalypse is that of a person in difficulty: even if he is isolated, alone with his demons, on the edge of despair and often suicidal, he will still find the strength to carry on, to survive, to see the sunrise one more time. No matter how hopeless and futile his efforts seem to be, even though life keeps on throwing challenges at him, he does not surrender and keeps on fighting. After all, this is what we do in our lives too. When difficulties crush us, and everything seems blacker than black, we do not surrender but keep on living, because we are human and not zombies.