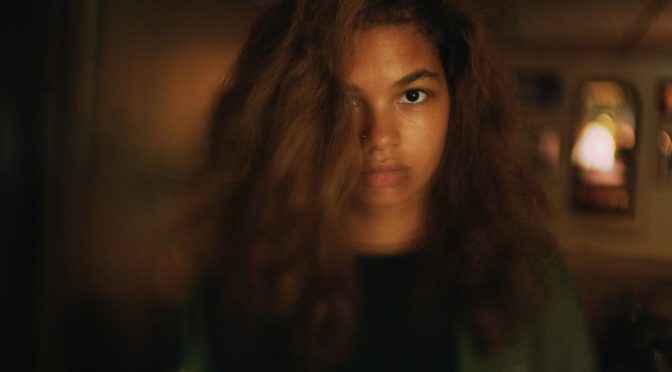 A woman talking about emotions to a cat. Maybe. A girl purring to her mother as if she was a cat. Some women wandering on a stage with fake pork heads on, creepy as if they were real. These are some of the images shown in the first five minutes of Josephine Decker’s new feature film, presented at the Torino Film Festival. The resulting confusion is the only certain element perceived by the audience, and it immediately appears as the film’s main feature, which is disturbing both in contents and in representation.

However, this is not surprising since we are talking about a director defined by «The New Yorker» as the initiator of a new grammar of narration, who has already offered out-of-the-box approaches in the past. Just last year, the Torino Film Festival audience was able to observe this in Flames, a film directed together with Zefrey Throwell and hosted in the Festa Mobile section.

This time, the director of Butter on the Latch (2013) and Thou Wast Mild and Lovely (2014) tells us, or rather, plunges us slowly in the story of Madeline (Helena Howard), a sixteen-year-old girl from New York and talented stage actress, with an unspecified behavioural disorder, trapped between her mother’s (Miranda July) understandable but mismanaged anxiety and her drama teacher’s (Molly Parker) fascination, too focused on the young girl’s performative skills to notice the possible negative effects of her attitude.

The film meditates on mental illness, focusing on the consequences that it can have within social and family dynamics, rather than on its representation. Everything is depicted from the protagonist’s point of view: the spectator identifies with it thanks to a flow of suggestive and surreal visions. Blurred images and tight close-ups given by a camera constantly attached to the bodies: an expedient the director uses in order to share with the audience Madeline’s inability to see the bigger picture of what is happening around her, thus leading to her instability; it is also used to emphasise the physicality of a film that tells the story of this girl’s life as if it was a never-ending performance.

Cinema, music and improv theatre blend in this film based on a tangled interweaving of art and life references, proposing itself as an intense and delusional reflection in every possible sense.