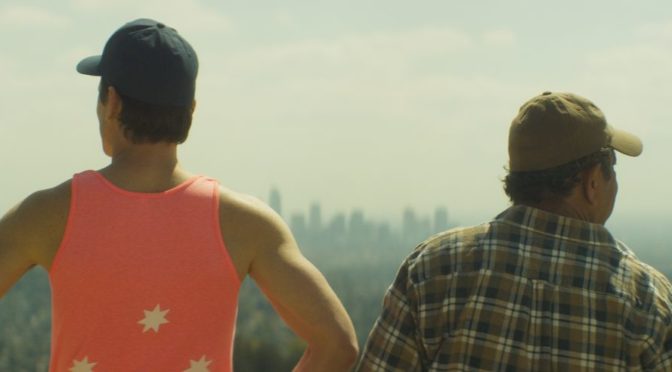 Papi Chulo. No, it is not only the electro/dance song by Lorna, the rapper form Panama, which became viral at the beginning of the 2000s and was played in dance clubs all over the world – even if perhaps this title is what unconsciously attracted me to this movie. If Papi Chulo was for me only a song I used to hear in clubs, now these two words have become representative of a movie. And what a movie.

Let’s start from the beginning. Sean (Matt Bomer) is a young successful meteorologist: many recognize him on the streets of Los Angeles because of a recent nervous breakdown on national television. Soon, we discover that the cause is the love story with his ex-boyfriend. Sean are given forced holidays to get his life back on track, but soon his loneliness will push him towards the research of new relationships, and here comes into the picture Ernesto (Alejandro Patino), a middle-aged Mexican man who every day waits for work opportunities at the roadside. When Sean sees Ernesto, he decides to hire him to paint his terrace, but soon the man’s role will be that of a paid friend, to which Sean can confess his insecurities. “Has someone ever told you you are a good listener?” Sean asks him.

The problem, which also represents the strong point of this comedy, is the impossible communication between the Mexican guy and the Gringo, who must give up words in order to communicate. That’s the essence of this film: a buddy movie, the story of two men who manage to create a real friendship despite the linguistic, cultural and social barriers. The filmmaker John Butler takes full advantage of this possibility without emphasis or excesses. With his moderate style, Alejandro Patino proves to be a real purebred horse, succeeding, thanks to the expression of his face and eyes, in communicating not only with Matt Bomer, but especially with the audience, in which he causes a genuine reaction.

One of the most beautiful things of the evening was indeed being able to observe something I hadn’t seen in a while: truly amused, passionate and attentive viewers. Right on this last aspect I want to conclude my analysis: at the end of the film, I had the chance to exchange opinions with other viewers. I was particularly struck by an observation according to which, the filmmaker had provided a stereotypical representation of homosexuality, and of characters such as the rich meteorologist and the poor Mexican man. But, in my opinion, there was a deeper meaning and it could be summarized by a question which I now leave open: who saves who? The one who helps the troubled poor man, or the poor man who helps the rich one to fill the emptiness in his life? I do have my personal answer.