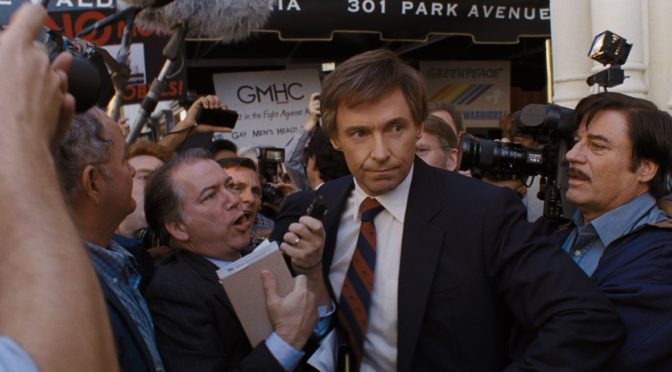 “A film written by a journalist and a political activist with the Ghostbusters director’s son”. With these words Jason Reitman opens the TFF36 press conference, of which The Front Runner is the opening film. He refers to Matt Bai – author of All the Truth Is Out, the novel the film is inspired by – and to Jay Carson – House of Cards producer and consultant. Reitman reveals then that the first frames, the Columbia’s vintage logo from Stripes (Ivan Reitman, USA, 1981), are a tribute to his father and to the film which accompanied the director’s childhood.

The Front Runner is based on the democratic senator Gary Hart and on the “blonde girl on the boat” scandal, which cost him the 1988 presidential campaign, but there’s more. Since the beginning, we are led to identify the press as the co-protagonist of the story: a prolonged long take submerges the viewer in a dispersed and chaotic context, a continuous coming and going of paparazzi, press officers, technicians and journalists, whose reciprocal insults overlap. It seems that the point of view chosen by the author is the tabloids’ one, but, as the film proceeds, the event is gradually given a different light.

The viewer must actively participate in order to choose autonomously the best perspective, from which to observe and individuate the character to defend and/or criticize. The task is not as obvious as it seems, given the importance of the cast in quantitative and qualitative terms. The spotlights (or even better, the flashes) are for the charismatic and convincing Hugh Jackman, who is up to the situation with a meticulously prepared and perfectly controlled interpretation, giving Hart charisma and humanity, as a man and a politician, rather than as a womanizer. With the same humanity Sara Paxton plays Donna Rice: when she is showed for the first time in close-up, after always being filmed from behind or without showing her face (in the yacht Monkey Business sequence), we do not see the ruthless seductress described by the media, but a tearful woman, beautiful but with wounded pride, humiliated in front of the whole world and completely defenceless, forced to see her promising future fade in front of her; emblematic the scene on the escalator, where she is slowly swallowed by a whirlwind of photojournalists and cameras. The last person of the love triangle is his wife, Lee Hart, who acquires depth and dignity, thanks to a flawless Vera Farmiga, back on Reitman’s set after Up in the Air (J. Reitman, USA, 2009): locked up in her home, with the United States interfering in her family’s life, the missed First Lady melancholically plays the piano, takes care of her teenage daughter and supports her husband in the most difficult moment of his career.

J.K. Simmons – in his sixth film with the director – does not disappoint as well: with his irresistible sarcasm, he plays perfectly the role of Bill Dixon, director of the election campaign. A merit note must be given to Molly Ephraim and to Mamodou Athie, who together have the role to convey some of Reitman’s questions to the viewer, the questions that must echo in your mind when leaving the theatre: within which limits is it right for a man’s increasing power to coincide with the violation of his privacy? Which factors do we take into consideration when judging his actions?