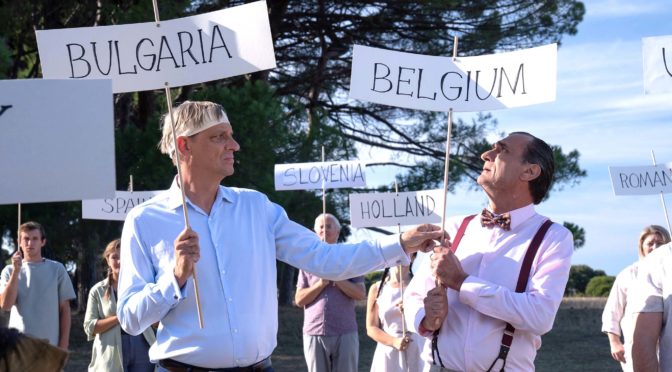 After King of the Belgians (2016), King Nicholas III (played by Peter Van den Begin) is back with an unconventional sequel directed by Jessica Woodworth and Peter Brosens, The Barefoot Emperor, which depicts the crisis of identity in Europe and satirizes the major powers. The sovereign, who had crossed Europe in order to go back to Belgium, split by a coup d’état carried out by the Walloons, now has to face a new surreal threat: the disbandment of the European Parliament and the crowning of an emperor of Nova Europa.

This sequel was not planned, at first. The directors have decided to resume the story of the king while sojourning on the Brijuni Islands, at the former dictator Tito’s estate, where the whole story takes place. Differently from King of the Belgians – a road movie directed like a mockumentary, in which the king was travelling from Turkey to Croatia throughout many misadventures and disguises, and discovering the great diversity of the Balkans -, this new movie is based on immobility. The sequel resumes the story exactly where the previous movie had interrupted it: the king and his crew are escorted to Sarajevo in order to be picked up by the Belgian security, but while they are passing in front of a memorial of the assassination of the Archduke Ferdinand, the king is shot. This scene carries the aim of the whole movie: speaking about politics by comparing the present with the past, which is made necessary by the people’s dissatisfaction with Europe as it is nowadays.

While not being an explicit satire, this movie tries to convey disorientation before something that is surreal. Compared with the previous one, in this movie static frames and long shots are widely used, while the dazzling light and the empty room among the characters are representative of an annoying feeling of waiting. The whole action takes place outside of the island in which the king is hospitalized. The name of this place is revealed only by the phone conversations and by the fantasy politics game played by the sanatorium director (Udo Kier). He gives each patient the name of a European country or of one of the important guests of Tito, from Gandhi to Arafat up to Elizabeth Taylor, name given to the character played by Geraldine Chaplin. Everything happens in front of King Nicolas, who is still trying to find himself, bearing a great responsibility, and is empowered by a strong sense of duty, but seems to be the only one able to change the situation with humility and cunning insights.