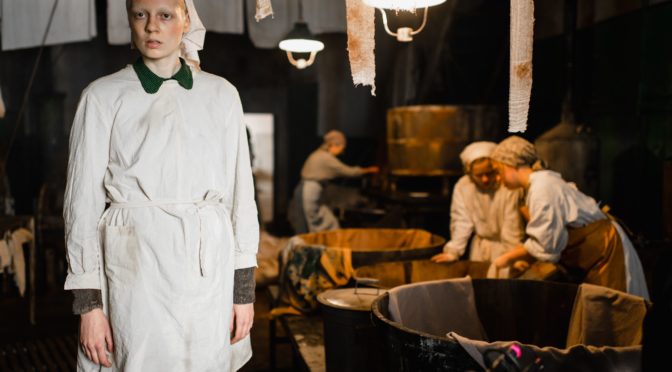 Ila, Ija: the names of the protagonists of two of director Kantemir Balagov’s films are separated only by one letter. Two women divided by fifty years of history and yet somehow connected: on the one hand, Ila, the protagonist of Tesnota, a young Jewish woman who acts like a tomboy and works as a mechanic; on the other hand, Ija, or Dylda (“beanpole”), as everyone calls her, a slender nurse who suffers from sudden epileptic seizures which completely isolate her from the real world. Two women whose lives are similarly marked by diversity, in spite of their living during two different periods of the history of Russia: for Ila, the start of the war between Russia and Chechnya; as for Ija, winter 1945 in Leningrad. On the one hand, the crumbling of the Soviet Union, on the other hand, its origins. And, at the two opposite ends of the spectrum, two women grappling with motherhood.

If the chief theme of Tesnota was the archetypal mother-daughter conflict, Dylda focuses on what appears to be more of a psychological duel between equals. After raising Masha’s son, Pashka, Ija reunites with her former comrade-in-arms. The two women couldn’t be more different: while Ija is perpetually lost in her own thoughts and reveries, Masha is sensible and pragmatic. Despite their differences, the two are connected by a bond that goes beyond mere friendship; they support each other and even protect each other from unwanted male attention: they are indeed each other’s pillar of strength. But when Masha finds out that little Pashka has suffered a fatal accident, their relationship takes a turn for the worse: Masha soon becomes delusional and tries to convince Ija to get pregnant in her place, as she can no longer have children. However, in spite of her efforts, Ija cannot grant Masha’s wish.

It is interesting to observe how the two women represent two sides of the same coin: femininity. Ija is a nurturer, who sacrifices her own well-being in order to help others, whereas Masha exerts her power in an absolute and domineering fashion, charming everyone into obeying her without having to sacrifice her own happiness. These two women end up deceiving and even blackmailing each other in order to fill the void left by Pashka’s absence, though their conflict appears to have all the markings of a power struggle.

With Stalinist Russia as its background, Balagov’s work is intense, refined and superbly acted; the mise-en-scène is accurate and elegant, mostly made out of lavishly coloured interiors, which contrast with the muted grey hues of the surrounding winter landscape. The film offers a realistic portrayal of how, even in a world where everyone is entitled to everything, every individual has their own emotional void that nothing will ever manage to fill.