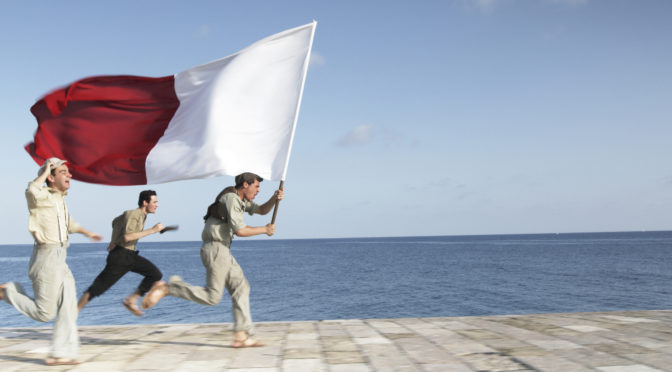 June 7th, 1919: the small nation of Malta refuses to be dominated again by the British Empire, reaffirming the desire for independence. And among the city’s ravines, the roofs of the houses and the squares of the island off the coast of Sicily, blood begins to flow when the British commence firing and begin to impose their law.

“Blood on the Crown” is not, as it may seem, an exclusively political film. To the inevitable social criticism, Davide Ferrario combines an archaeological hunger for discovery of a culture that remained buried for over a century. In a beautiful land plundered by modern cinema (we all remember the evocative views of the landscape of The Gladiator by Ridley Scott), no one has ever questioned the artistic and social roots of the small Mediterranean island, nor the recent history, on the customs and traditions of a community so small as to be considered negligible. Combining the political, artistic and historical souls of his feature film, Ferrario succeeds in the arduous feat of not sacrificing any of the three: to the reflective detachments on the friezes of the English Governor’s house to the most crude scenes of the revolt, the camera’s eye does not exalt the first and does not spectacularize the second, allowing long shots only for important narrative turns, thus not weighing down the rhythm of the film.

Keefa Chan’s photograph is interesting. The Thai PDO works with natural light, seeking virtuous machine points to exploit in the most original way possible the morphology of the island. The film is bright and the scene of the revolt takes place under the rays of the sun, but the sequences in the dark are fundamental. These are reflective, more humane moments in which Maltese and British soldiers seem to wallow in the same moral dilemmas. They are fleeting moments, because Ferrario does not make discounts from the beginning: the first scene is set in the infirmary at the end of the English intervention, in which there are the wounded and the dead. The vertical construction, from top to bottom, of most of the shots sharpens even more the inequality of treatment that history reserves for oppressors and oppressed, placed constantly on two different levels.

The story of the “June 7th”, National Day of Malta, a prelude to the subsequent independence, is a bloody chapter archived as «just noise» from the judicial acts of the time. By contrast, the noise filmmaker inserts a few of them, despite the many chaotic moments. He alternates the beautiful soundtrack of Alexey Shore with classical lyric compositions and insistent silences and sighs. Even the punches and gunshots seem to lose their effectiveness in comparison to the images of the human sacrifice of the smallest nation ever to have opposed the Crown of England.