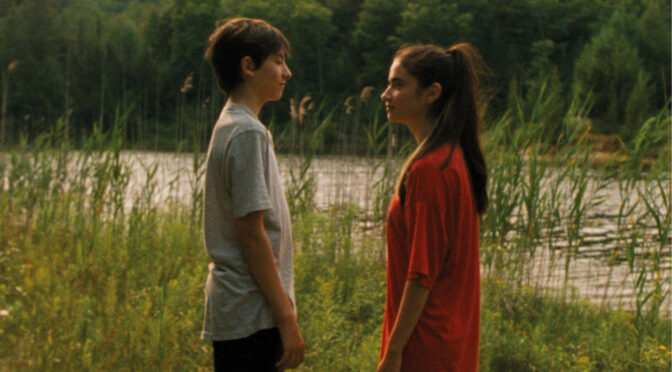 Charlotte Le Bon, in her directorial debut, plumbs the age of adolescence by telling the story of a summer interlude at the lake. To do so, she draws heavily from the graphic novel Una Sorella (Bao Publishing, 2018) by french author Bastien Vivès, in which we find a recollection of all the ambivalences of the early youthful desires. Falcon Lake focuses on the mutual attraction between the two main characters. Chloé is a 16-year-old girl who tries so hard to act like an adult even when she’d rather press pause on everything. It might be this nature of hers that drives her to seek out Bastien, who’s two years younger than her and is openly inexperienced and subjugated by the charm of her ostentatious and constructed confidence. The two kids are immortalized in their purest naiveté as they awkwardly discover each other’s bodies. In the background, the actual adults, the parents. In Una Sorella, Vivès never depicts their faces, because that story is not theirs. And Le Bon reproposes this choice in her own language, the language of film: the parents are relegated off-screen, the faces unseen, with only their voice as a testament of presence.

In the last act, Le Bon, also the author of the screenplay, detaches her work from the one her feature film is based on. The ending she chose for the male protagonist is symbolic of the core of adolescence itself, an age spent on the edge between life and death. “There are ghosts who do not know they are dead,” and it is these ghosts, with their desires, who make up our youth. The two kids live their experiences in an absolute and fatalistic way, without the emotional processing typical of those who have already gone through adolescence and emerged unscathed.

Falcon Lake does not stray very far from coming-of-age narrative clichés. Despite that, the director creates a space of rigorous representation in which the anxieties and discoveries of adolescence alternate, within which the viewer can find themselves and their own experience.