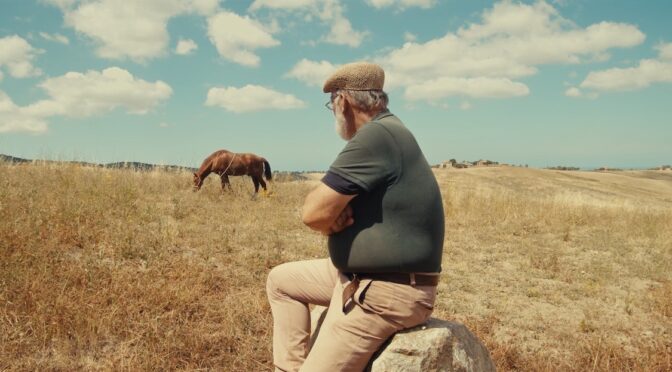 Thanks to the Covid-19 emergency a lifer finds himself in a situation of greater freedom when compared to that experienced by many others. In Il corpo dei giorni much more is revealed, thanks to this paradox. Santabelva collective meets the lifer Mario Tuti, one of the protagonists of the neo-fascist terrorism in the 1970s, in an unexpected situation. Interesting starting points arise from this confrontation, both historically and cinematically.

From the one hundred days long shooting sessions, which took place at the beginning of summer 2020, emerges a portrait of a high-esteem person, with no regrets about the crimes he committed, who dares to give lessons to the younger generations. One sentence sticks out: “A good fight makes good a cause” – which sounds more like a justification than an advice. A clever character, aware of the directing mechanisms and capable of dealing with them on a different dialectic level, dense with nuances. During the final monologue of the documentary, Mario claims to be monolithic and immutable, showing to wear a mask that nevertheless does not conceal him completely. In fact, in the farmhouse where he is imprisoned, Mario relates with other people, especially with Pio, the landlord, who’s become genuinely attached to him. The film thus becomes an analysis of a cracking person, whose seemingly inscrutability, is fundamental and revealing.

The result is an attempt at a constantly interrupted dialogue. Indeed, the cinematographic awareness of the subject leads the documentary to become a work on the very act of filming. The first scenes, which result to be ironic thanks to their simplicity, create an unfiltered situation in which we enter into the characters’ lives in the farmhouse and, particularly, Mario’s. For example, when Pio is moved to the center of the scene or when Mario comments on the position of the cameras and the crew’s microphones. While everything around him changes and evolves, Mario remains seemingly true to himself and sure of his choices; nevertheless, his insecurities are filmed thanks to a massive recording work and edited into a non-judgmental film, with a clear position.