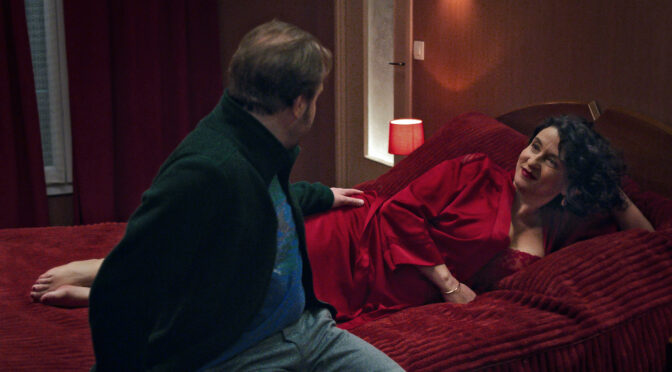 In the theory of pre-established social relations, the practice of affection allows one to unhinge the certainties on which one individual bases his or her relationship with the other. Life is a tumult of unexpected encounters, of ephemeral and transitory desires, of painful external interferences and accidental impediments: men must get used to the mutability of life, making themselves and their desires as inconstant as the unpredictable circumstances of reality.

This is the message that Alain Guiraudie dedicates to all humanity in Viens je t’emmène, his latest feature film presented out of competition at the Turin Film Festival. The director once again stages a story on the fringes of the genre, between the comic and the melodramatic, holding firm to the interest in the social context that had already marked some of his previous works (Le roi de l’évasion, 2009; Rester vertical, 2016). A proponent of personal utopias, the director continues his search for alternative community formulas that can be reconciled with the natural mutability of the human condition.

In the film, Médéric (Jean-Charles Clichet), a young man in his thirties, becomes hopelessly infatuated with Isadora (Noémie Lvovsky), a middle-aged prostitute who practices her profession despite the impediments put in place by her husband. Although the desire of the two protagonists is uncontrollable, during the narration their faithless intimacy is interrupted by interference from the outside world – including a terrorist attack – that repeatedly breaks their orgasm. Guiraudie presents us with an impossible love, a potential one that never seem to come true, but it is in this very unfulfillment that the erotic tension that shakes the two lovers is created. Indeed, the director seems to oppose orgasms, he disassociates himself from the temptation to give a fixed point to the characters and their relationships, proposing a queer vision of sexuality as an indefinable work in progress.

In the finale, the trajectories of desire and paranoia of the characters result in a conclusive sentimental rearrangement, from which they start again to experience new loves. Other passions are born, and other unexpected acquaintances are made. And in the deafening clamor of life, the protagonist has no choice but to keep running, as he does throughout the film.