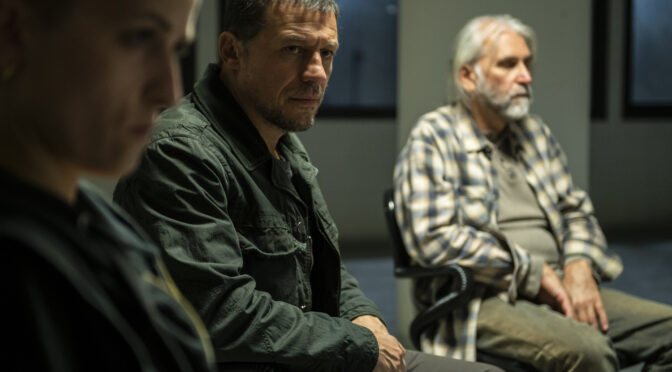 The dystopian narrative, which became popular in 20th century literature and cinema, has always been an effective tool to analyse and discuss contemporary society’s problems and changes. Alberto Mascia, with his movie Ipersonnia, takes the topics which in the past years have generated intense debates in Italy and puts them in a near future. The high crime rate and the severe overcrowding in Italian prisons have pushed politicians towards an extreme solution: turning prison sentences into years of forced sleep.

David Damiani (Stefano Accorsi) is a psychologist whose job consists in periodically waking up inmates to monitor their mental health. The forced sleep takes a toll especially on the convicts’ brain, as they find it hard to distinguish dream from reality. Ipersonnia is based on such dichotomy and the movie’s atmosphere draws inspiration from films such as eXistenz (Cronenberg – 1999) or Memento (Nolan – 2000). The dreamlike element directly correlates to psychoanalysis and its immoral use combined with technology. Due to a brainwave inhibitor, the inmate is vulnerable while the psychologist can insert all kind of ideas in his mind, even potentially convincing him of being guilty of crimes he did not commit. Therefore, Ipersonnia presents a new and interesting interpretation of the “transplants” of ideas carried out by the protagonists of Inception (Nolan – 2010). While in Nolan’s movie the manipulation only took place in the dreamlike worlds created by people’s minds, in Ipersonnia the process happens while they are awake, through psychanalysis. Technological advance, combined with psychotherapy, allows for the destruction of all the barriers of the unconscious and sleep simply becomes a moment of stasis and imprisonment. Despite all the thematical and narrative suggestions, the style of the director remains inert, in function of a simpler understanding of the events of the film.

Prison overcrowding, justice and its problematic implementation are important issues of our society that are hinted at by the film, but are relegated to the background. The narrative turns mostly to conspiracy theories and to the deterioration of the power which is trying to take control of the citizen’s minds. Ipersonnia is part of the recent attempt by Italian productions to make the public interested in genre film once again. Such attempt is perhaps lacklustre in its comparison with dystopia, which would require a critical and in-depth analysis of such current and relevant issues, both in its content and in its form.