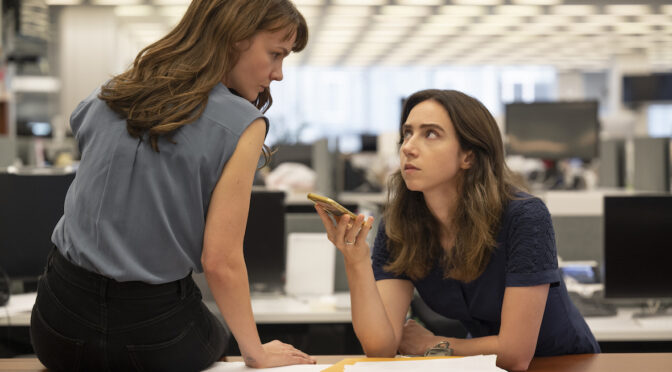 The unbearable weight of manipulative ambiguity, unfounded guilt, and complicit silences. Maria Schrader’s new film, out of the competition at the 40th edition of the Torino Film Festival, is a protest against Harvey Weinstein that unleashes the desire to cry out that women have been deprived of for so long, and thereby redeems the right to their voice.

A young woman at the very start of her career, her soul bursting with dreams and her eyes full of naive hope, is overcome by a request as unexpected as it is inappropriate just when she was planning to attend a business meeting. “He ripped out my voice that day, just as I was starting to find it,” discloses Laura Madden, confessing her years-long belief that she was the only one who did not have the strength to stand up to the harassment from the powerful and feared Miramax producer. Laura was far from alone, but her persecutor was for a long time protected by a well-established system that systematically and scrupulously shielded the offenders. New York Times’ reporters Megan Twohey (Carey Mulligan) and Jodi Kantor (Zoe Zakan) undertook an investigative enquiry to expose the harassment and sexual abuse committed by Weinstein, who had crossed not only professional boundaries, but also national borders, committing countless abuses overseas.

The She Said crew is well aware that they are telling a true story and do not allow room for unnecessary violence, to which women are already abundantly exposed.

Weinstein’s towering physical presence is rendered by the oral testimonies of women who describe episodes in which he holds the unmistakable authority of the perpetrator. At the same time, his voice is emblematic, as we hear it in voice over, as violent and arrogant as the suffocating agreements he induced his victims to sign, ‘legally’ depriving them of their dignity. We retrace, guided by these testimonies, the spaces from which they would have so much wanted to escape, as in a nightmare from which they were not allowed to awaken. This film, however, also wants to be a safe space for all the women involved in order to express themselves and share their grief and anger. First and foremost, Megan and Jodi, that we follow far beyond the investigative processes and that Maria Schrader reveals to us with great sensitivity and respect. The cooperation and supervision of those directly involved and their permission to enter into each other’s private lives were undoubtedly essential to achieve the goal of producing a film that resonates strongly and encourages women to trust each other.