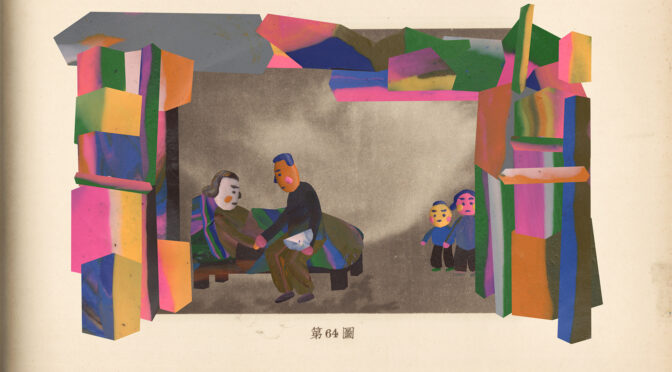 In recent years, documentary cinema has exploited animation for intimate and personal narratives capable of giving a fresh insight into complex historical events. Films such as Waltz with Bashir (Ari Folman, 2008) or Samouni Road (Stefano Savona, 2018) discussed with a microscopic look events of enormous magnitude in an attempt to understand their profound nature. Through the memories of both his grandfather and father animated in stop motion, director Lei Lei retraces the difficult years of his family, divided by the Cultural Revolution in Maoist China.

The structure of Silver Bird and Rainbow Fish effectively reflects the fragmented nature of historical memory. The animation, indeed, consists of hand-moulded plasticine, newspaper pages, old photographs and illustrations from the propaganda of the time, combined in a collage of different styles and languages. The images generated from this mixture are not just an artistic re-elaboration of what is narrated off-screen. The voices of the relatives interviewed by the director often linger, take long pauses or are interrupted as the memories become less clear. It is precisely in these moments of emptiness, of repressed memory, that the animation shows its evocative power, transcending the historical narrative through references to Chinese fantastic imagery and mythology.

Like the images, the narration is structured on several levels as well, in a temporal collage covering almost thirty years of History, through the voices and points of view of three generations: the director’s, his father’s, and his grandfather’s, interviewed ten years earlier. These overlapping temporal planes correspond to the various materials used in the documentary. If the plasticine moulded by Lei Lei’s hands represents contemporaneity and his imaginative, ironic and changing point of view, the photographs and newspaper clippings are the faded remains of a vanished world.

Throughout the film the author reminds us several times, in a variety of ways, that what we are seeing is but one of the endless possible visions of what happened, filtered by the experiences of the various members of the family and the director himself, who imagined the events with his artistic sensibility and a contemporary eye. It’s impossible to restore a complete image of the past, but it is for this very reason that small stories like that of the Lei family are so important and worthy of being told.